As reported last month, real-estate selling activity in the Puget Sound region carried forward the late-2019 price recovery until mid-March, when the first of the Governor’s orders relevant to COVID-19 were announced. The CoreLogic Case-Shiller Home Price Index[1] results published by S&P Dow Jones in late April confirm that residential prices continued to rise in February. While historically, we have used the Case-Shiller index to confirm the current direction of prices, in these never-before-seen circumstances, we can be certain that will not be the case. Instead, we find in these results confidence that after an eight-month run-up in prices, building upon the advances of the preceding five years, no city in the country entered this crisis better prepared for a rough patch than Seattle. 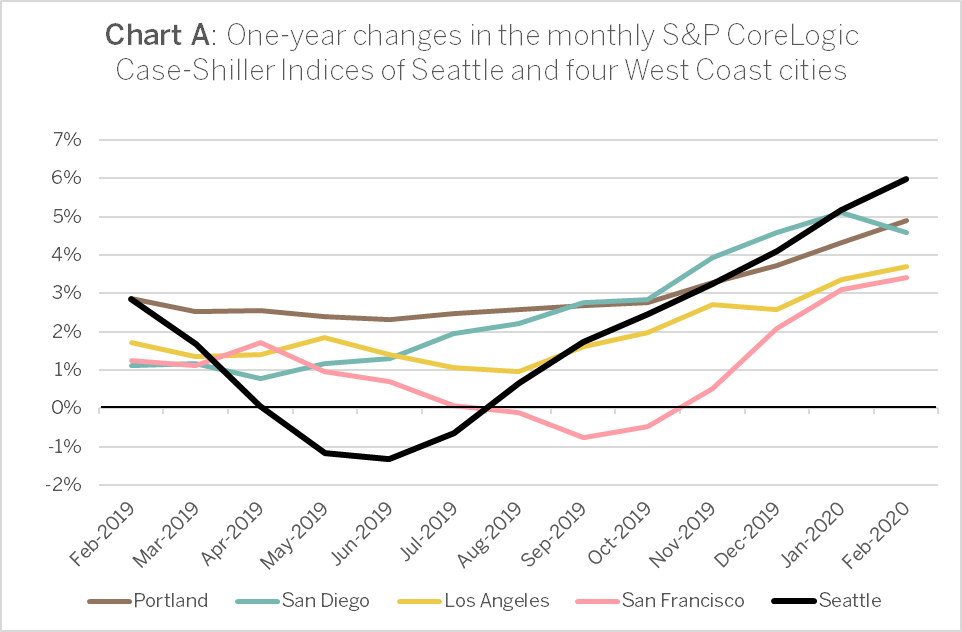 Having risen steadily since July 2019, the Seattle price index overtook San Diego in January 2020 at 5.2 percent growth year over year, then added another 0.8 percent, reaching a year-over-year increase of 6.0 percent in February. The February year-over-year growth rates of the competing West Coast cities were 4.9 percent at Portland, 4.6 percent at San Diego, 3.7 percent at Los Angeles, and 3.4 percent at San Francisco. Nationwide, only Phoenix residential prices outpaced those of Seattle, at 7.5 percent year over year. Note that Phoenix prices had started from a lower base even before the damage done to that market during the subprime loan debacle of the late 2000s. With fewer economic generators, Phoenix, Las Vegas, and other Southwestern cities comprise a very different market from that of Puget Sound. 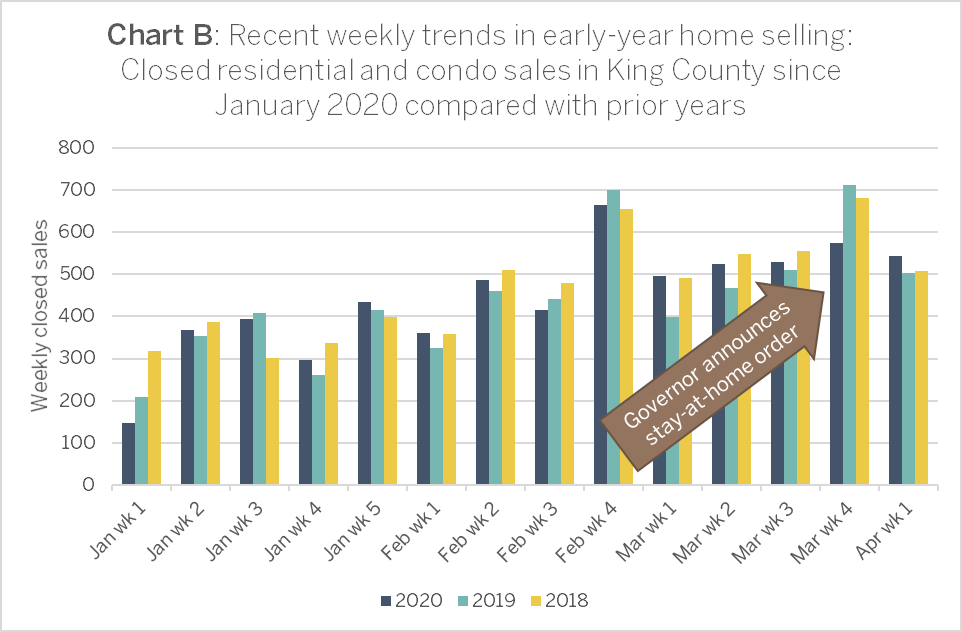 In the S&P Dow Jones press release, Craig J. Lazzara, Managing Director and Global Head of Index Investment Strategy at S&P Dow Jones Indices, reported that “The stable growth pattern established in the last half of 2019 continued into February,” and that the index “results for the month were broad-based, with gains in every city in our 20-City Composite; 17 of the 20 cities saw accelerating prices.” In respect of COVID-19, of which early cases were just then being reported, Lazzara acknowledged that “As much of the U.S. economy was shuttered in March, next month’s data may begin to reflect the impact of these policies on the housing market.”[2]

The recent strong residential price performance in Seattle and many parts of western Washington is the best preparation for whatever lies in store for home buyers and sellers.

Although Case-Shiller index results for the following months are yet unknown, we do now have some notion of the threat to local housing markets. First are the coast-to-coast stay-at-home orders themselves, which are unprecedented and would be unenforceable on this scale in earlier eras. The second threat was exhibited in the March stock market crash, which to some seems in the midst of an ongoing recovery, evidenced by a six-week rally in the DJIA and S&P 500. Bank of America is among those experts who are not as sanguine on the prospects for a market rebound:

The bank expects that the surge is currently running into resistance and will roll over before retesting the March 23 lows, if not making new ones, it said in a note Tuesday [21 April]. A return to the market lows would represent a decline of 18 percent from [the 21 April] closing price in the S&P 500.

The bank said that the market will have a difficult time sustaining valuations near their pre-coronavirus peaks given that in only the second week of U.S. earnings season, 80 companies have withdrawn their guidance, 20 companies have cut their dividends, and 60 companies have suspended their buybacks.

Other factors contributing to the market call include oil prices turning negative for the first time in history.[3]

The third threat is an intergenerational record drop in consumer confidence that is feeding the market pessimism.[4]

The aforesaid indices and other measures are most useful under normal market conditions. At those times, they help to indicate the feelings and ambitions that buyers might carry with them when considering a home purchase. The fourth threat is more direct than the others, as it strikes at the buyers’ means of payment. That threat is rising unemployment, which may increase the urgency of some owners to sell while raising the risk to buyers and thus suppressing demand.

The Puget Sound region is buoyed by our high-tech economy, which has proven resilient to more typical recessionary threats. However, there is no roadmap to follow under current conditions. Locally, Amazon is carrying an outsized share of the recent market rally. The outlook for Amazon, Facebook, and Alphabet (Google) at least partly benefits from the stay-at-home orders, as people have no other means of carrying on business and relationships and meeting more basic needs, except by means of these platforms.

In contrast, the state’s leading employer, Boeing, had already idled production at Renton in the wake of disclosures related to the 737 MAX. Since March, the aerospace manufacturer has announced suspension of all Puget Sound factory operations and layoffs of 16,000 commercial division employees. These cuts will spill over into Boeing’s extensive supplier network as well. Other impacts of the COVID-19 outbreak and response can be seen in the Washington State Employment Security Department’s charts of unemployment data. While weekly unemployment remained quiescent through February, that had changed by mid-April. 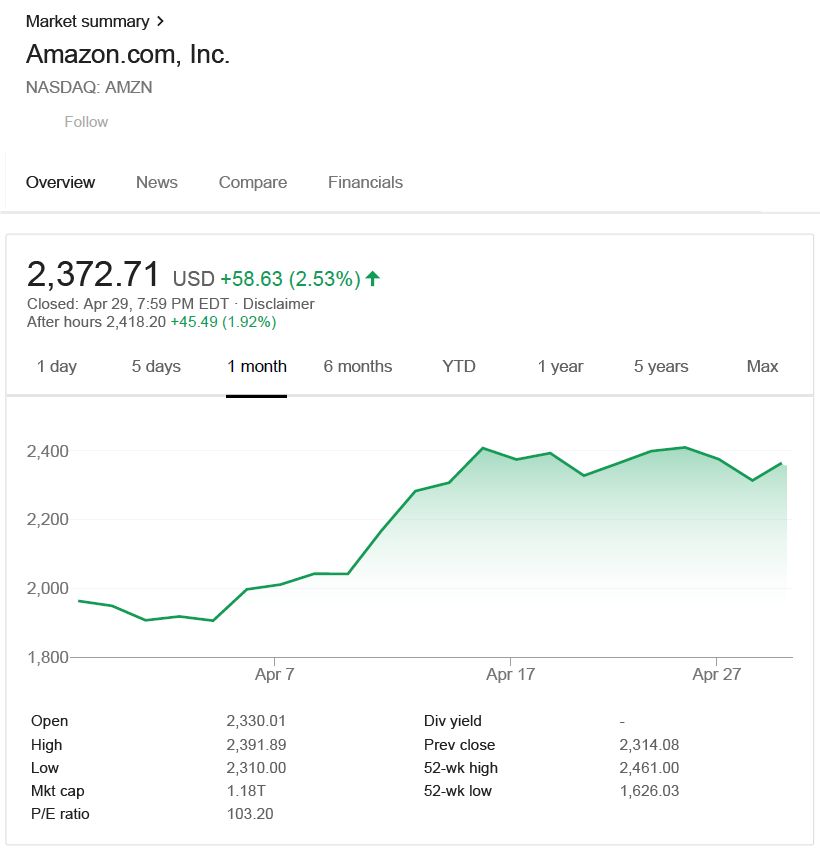 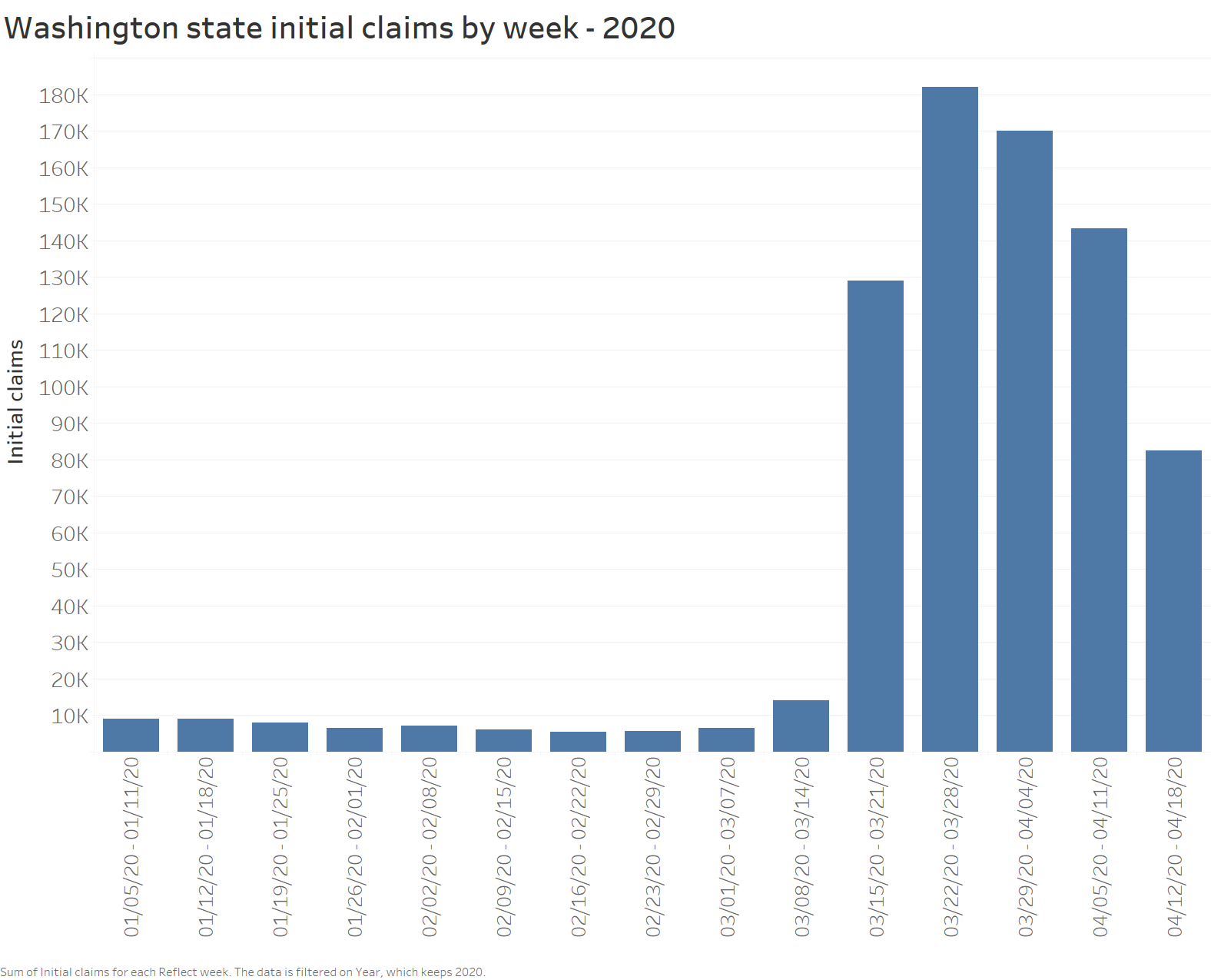 For most residential buyers, the fear of unemployment is going to weigh more heavily on home purchasing considerations than the recent stock market direction. Sellers and their brokers will need to factor this reality into their pricing discussions until the stay-at-home orders are lifted and some sense of normality has returned. If there is any good news in this for local sellers, it may be that these conditions are not exclusive to Seattle or King County. Across the country, state and local governments have responded in broadly similar ways to COVID-19, and our region is not uniquely burdened by those restrictions. Seattle home prices may therefore be expected to continue to outperform those of competing cities both regionally and nationwide.

This opinion was shared by participants at a Puget Sound Business Journal (PSBJ) Market Watch livestream event on the state of the housing marketing, hosted 23 April by Emily Parkhurst of the PSBJ. The event featured Bryan O’Connor, Principal of O’Connor Consulting Group; Lysa Catlin and Jolene Messmer of Caliber Home Loans; Marc Rousso of JayMarc Homes; and thought leaders at RSIR.

“We’re probably better positioned than any other metro area,” said O’Connor. “What has really been driving our local economy is tech, and that is because of our relationship with Southern California and Silicon Valley. We’re the number one place that people in Silicon Valley want to move to.”

“While COVID-19 will certainly challenge the trajectory of median home prices into Q2-2020, the relationship between supply and demand has largely stayed the same as in Q1-2020, albeit at lower volumes,” said Dean Jones, President of RSIR. As anticipated in our January 2020 Case Shiller report, this has resulted in a price-sustaining equilibrium. “Basically, the number of new listings added and the reduced number of new contracts pending both declined about by 30 percent from a year ago.”

For more details on the February 2020 Case-Shiller Index results, download the S&P Dow Jones Case-Shiller summary report. Our 2019/2020 Market Report is available for ordering now. For details on the market implications of our reports for homes in your neighborhood, contact a local RSIR broker.

[3] Matthew Fox, “Bank of America says the recent stock bounce is a bear-market rally similar to 2008. Here’s why it sees further downside ahead,” Markets Insider, 22 April 2020.