Given the strong tech-driven economy and vibrant downtown core, it doesn’t come as much of a surprise that Seattle is among the most popular U.S. markets for millennials. According to realtor.com® research, the Emerald City is the second hottest spot for millennials, who are drawn to its lucrative tech jobs and vibrant cultural offerings.

Analyzing data from the U.S. Census Bureau, realtor.com home searches and percentage changes in homeownership, realtor.com researchers found that in spite of high cost, millennials are overwhelmingly gravitating to tech centers because they offer not only the biggest paychecks, but also the type of lifestyle that young adults seek. As the report describes, thriving job markets are paramount to millennials, where they can access an eclectic nightlife scene with trendy eateries and bars. 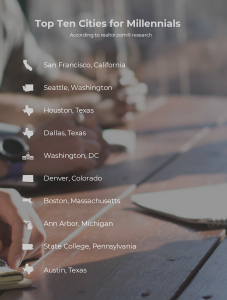 Millennials have been leaping into homeownership for some years now, but are quickly becoming the largest share of home purchases in the United States. As the realtor.com® National Housing Forecast predicts, millennials will account for 45 percent of mortgages in 2019—compared to 37 percent of Gen Xers and 17 percent of Baby Boomers.

Though it is expected that some first-time buyers may struggle in the coming year amidst rising mortgage rates and home price appreciation, realtor.com® says move-up millennials buyers will dominate the market in the coming year. Looking even further ahead, 2020 is what many are calling the “peak millennial homebuying year,” with the biggest group turning thirty that year. Millennials will likely retain their position as the largest share of generational home buyers for the next decade or so, as their housing needs shift.

Millennials are choosing to call Seattle—and many of the top ten cities—home because of a strong tech economy. According to the Tech-30 Report, compiled by large commercial brokerage firm CBRE, Seattle was the top U.S. market in 2018 with high-tech jobs increasing by a staggering 26 percent in the last two years alone.

To be sure, the Seattle metro area has become a magnet for both new and established tech companies, which are drawn to its relative affordability compared to Silicon Valley and prevalence of national tech centers that draw excellent talent to the region. As Realogics Sotheby’s International Realty reported in early autumn, the average salary of a software engineer in Seattle is $108,000 compared to $118,000. This $10,000 difference is rapidly offset by California’s state income tax—which reaches as high as 13.3 percent—and by the very high cost of housing, whether renting or owning. Taking a number of factors and differences into account, Seattle tech professionals enjoy a roughly 73 percent increase in disposable income when compared to their Bay Area colleagues.

The map below illustrates the location of existing and planned high-tech campuses and other large employers in the region along with primary transportation routes and subject communities.

Tech by the Numbers — Seattle

Tech by the Numbers — Eastside

Seattle’s relative affordability, high quality lifestyle, lack of a state income tax, and investment in transportation infrastructure will give the Seattle metro area a strong competitive advantage over other West Coast tech centers and will ensure the Emerald City remains a desirable location for millennials from around the nation.

Information was obtained from sources deemed reliable but cannot be guaranteed. Reader is encouraged to perform independent due-diligence before relying on information contained herein.