In line with the theme of this year’s event—Level Up—Realogics Sotheby’s International Realty invited top leaders and experts from a range of fields including personal style, investment, technology and more, to share key insights in panel and speech formats. 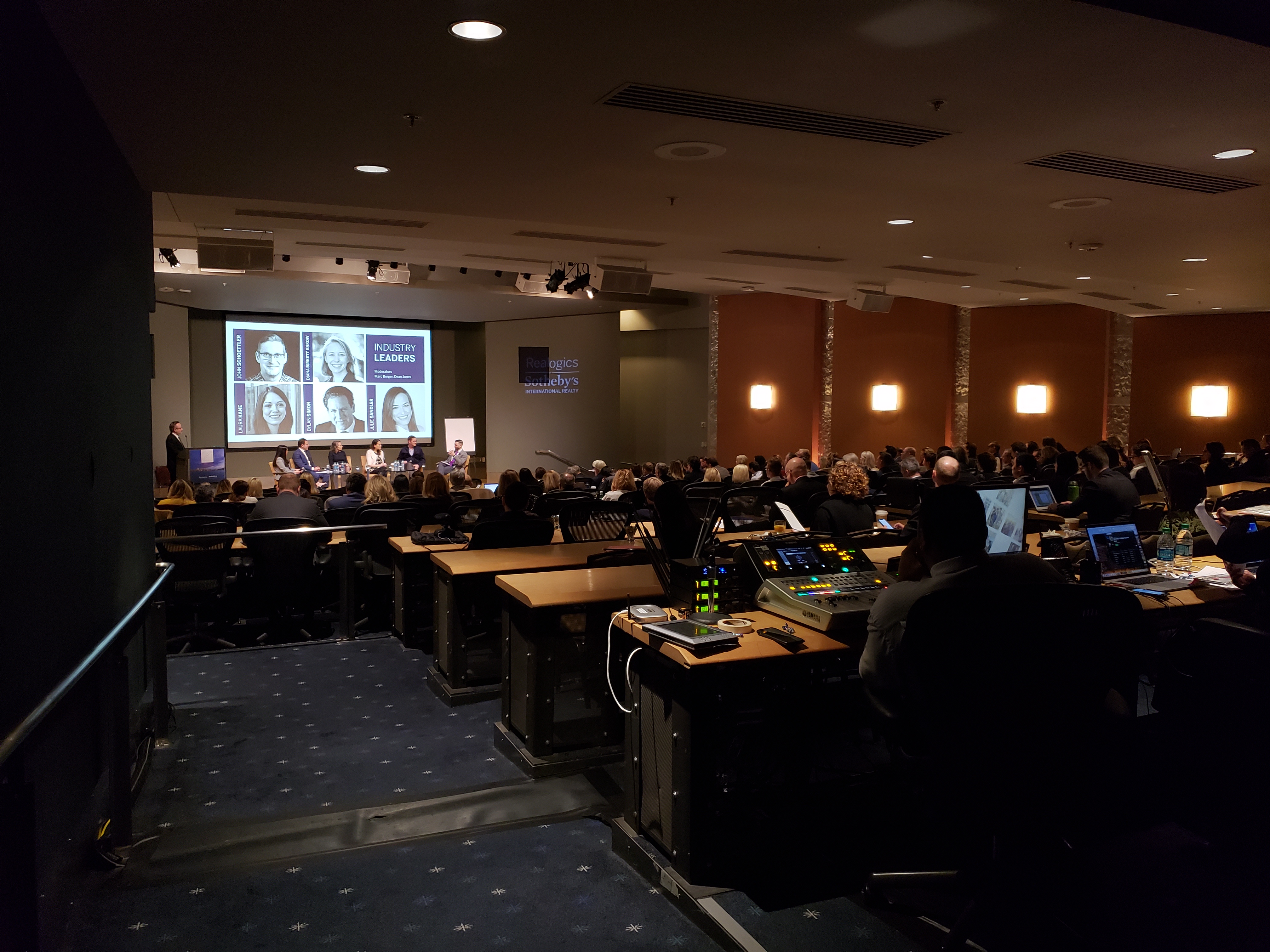 Attendees were thrilled to begin the day with the Industry Leaders discussion.

Kane kicked things off with a macro-analysis of where our market is today and what we can expect as we shift into 2019. She touched on China relations, Federal Reserve rate hikes and general uncertainty among consumers as top considerations, but noted that growth is expected to remain healthy for the coming year.

A highlight of Kane’s talk was her discussion of the rate that technology is transforming society. “Whereas it took twenty-five years for the television to become used in U.S. households, it only took seven years for the internet,” Kane said.

We are moving much more quickly than we did in previous decades, which Kane said makes it tough to think about the long term. How can we know where we will be in the next ten, twenty, or thirty years? We can look to technology to play an integral role in alleviating the challenges of the future, particularly within enabling technologies, healthcare and Fintech.

Next, Simon took to the podium to discuss job growth in our region. As Simon outlined, the Seattle area added 65,000 jobs last year, which far outpaced any growth we have seen yet. Though the unemployment rate in the area is slightly higher than the national average—with Seattle at 4.3% and the nation at 3.7%—hourly earnings are significantly higher. Simon also touched on new development units, which totaled 55,000 from 2010 to 2017 and are projected above 100,000 into 2018 and beyond.

Simon shared some of the local markets he is watching and the way in which urban living options are changing how people are living, commuting and shopping. Echoing Kane’s points, Simon brought up technology’s integral role in society, especially as it relates to experience, efficiency, transparency, reducing friction, social and lifestyle.

Using Kane and Simon’s introductions as a starting point, moderator Berger, guided the panel in their discussion of trends.

Schoettler, who Berger called “one of the highest profile risk takers in the industry,” discussed his approach to growth. As Schoettler outlined, the 1.7 million square feet of office space they acquired in the early 2000s was set to last the company through 2016 but by then, the e-commerce giant sprawled across 8.5 million square feet. Now, Amazon has reached nearly 14 million square feet in Seattle, and “That’s why we’re doing HQ,” Schoettler jested. 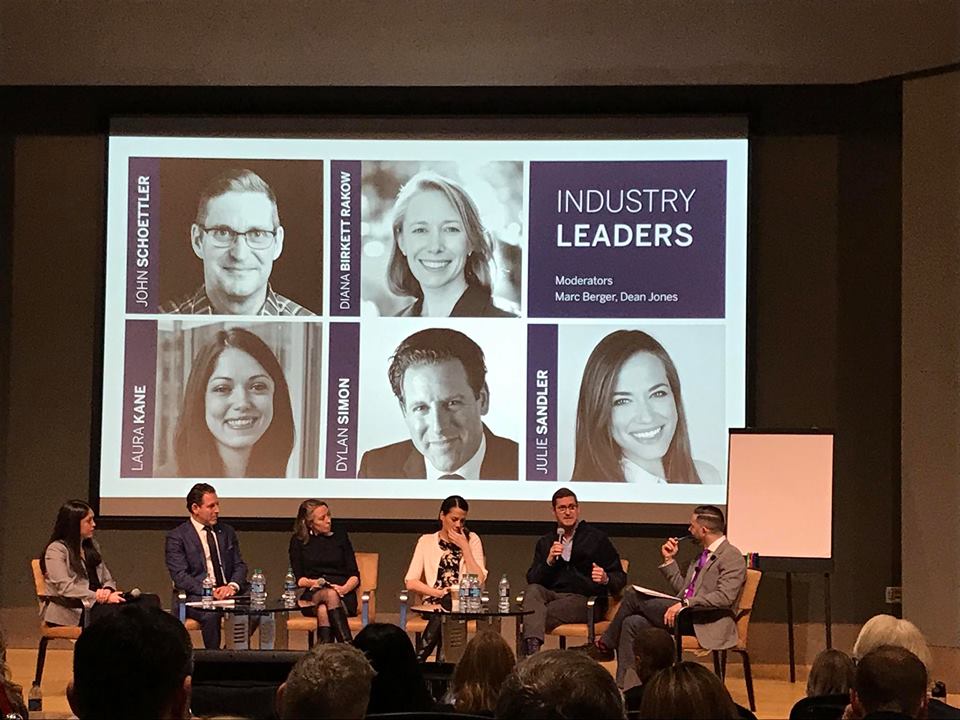 Schoettler discusses Amazon’s meteoric growth in the region and his approach to leading their real estate decisions.

It was then that Sandler of Pioneer Square Labs chimed in, talking about what it’s like to raise funds and help startups get their footing in the Seattle area. She pointed to the notion of diversity—a current hot topic among sociological conversations within business context—and discussed its role at the ideation level. She also noted that Pioneer Square Labs does weekly brainstorm sessions and that much of their success is built upon the idea that one will (and sometimes must) fail.

“We don’t only tolerate failure, we actually embrace it,” Sandler said. “We view failures as successes.”

Next, Birkett Rakow talked about Alaska Airlines and its local, national and international strategy for 2019. Locally, Birkett Rakow said the new domestic flights out of Paine Field will create new job opportunities and alleviate congestion in the region. On a national level, Birkett Rakow talked about the airline’s commitment to retaining the right to be—and stay—the number one airline on the West Coast. Internationally, Alaska Airlines is investing in the global experience for consumers and by summer 2019 will be providing 80 flights a week to 11 destinations, more international direct flights than any other airline group.

Birkett Rakow also spoke about the notion of sustainability, which moves far beyond thinking about the term as it relates to the environment. Alaska Airlines asks, “what can we do to increase our positive impact on the world around us?” This ties into looking at how to better support employees, flying greener, investing in strong communities and making flying matter through philanthropic endeavors. 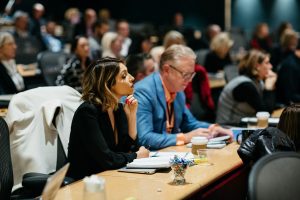 As time wound down, Berger challenged panelists with a set of rapid-fire questions to pull everything together. Each shared a key takeaway from the hour, which ranged from growth, sustainability and diversity (Schoettler) and understanding the consumer or client (Sandler) to the way in which technological innovation is mediated by human interaction (Birkett Rakow) and the way in which these vastly different industries are thinking about the same things, such as innovation, technology, diversity and sustainability (Kane).

Finally, Dean Jones, president and chief executive officer, RSIR, piped in to ask about pivotal future trends. Millennials overtaking the baby boomers as the largest segment in the population, the growth of e-commerce and more interest in sustainable investment, which can be tied to the shifting population (Kane); technology and the speed at which things are changing (Schoettler); what is happening locally, especially in terms of technology, here in Seattle – especially in computer science, bitcoin, artificial intelligence and big data (Simon); establishing a sustainable business model in society to bring diverse backgrounds together and remove the current trend of people watching news and talking to people they agree with (Birkett Rakow); and the inflection curve at which women leaders are making more presence in government and beyond (Sandler).

RSIR broker Britt Wibmer took to the stage to introduce Jennifer Woodbery, a management consultant and speech writer with over twenty-five years of experience in the field. Woodbery’s presentation was anchored by two key points: first, the ingredients of a story, and second, the approach to speech preparation and storytelling. 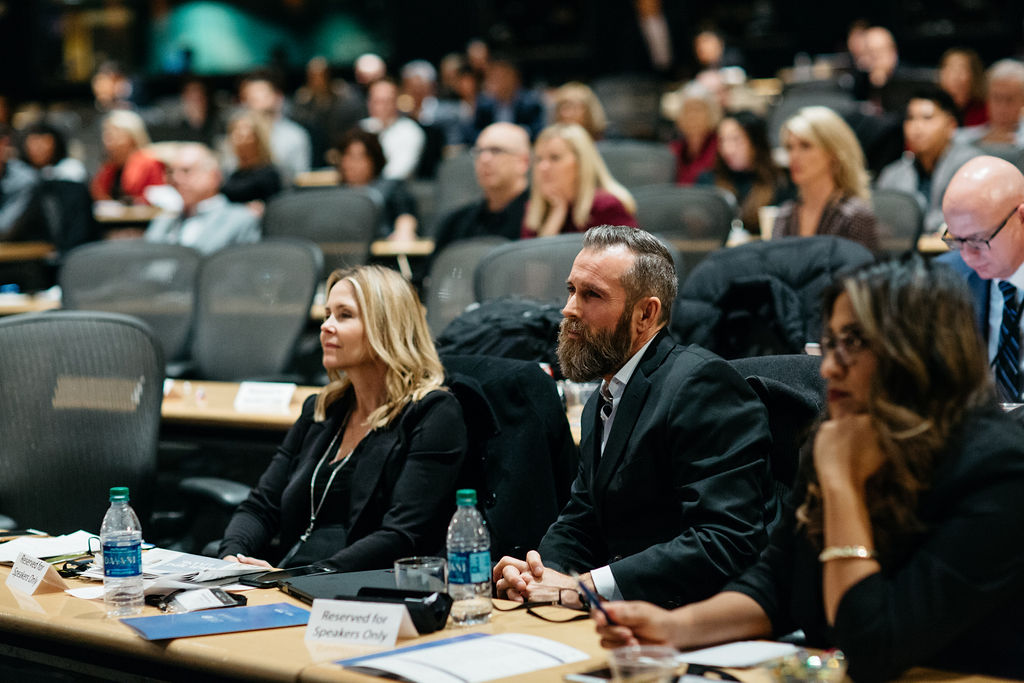 Members of the RSIR Executive Team listen as Woodbery discusses the art of storytelling.

“A story is a demonstration of values. They’re never going to hear you until they see you,” said Woodbery.

This means inviting the audience to make a positive move forward and working to solve the problem together. She gave many examples of great storytelling and speech delivery, including the story of athlete Justin Gallegos, who became the first runner with cerebral palsy to be hired as a Nike athlete.

At the end of the day, things may be boiled down to the “Yoda” approach: serving as a guide, taking the audience from their current understanding to the new bliss. It is also vital to remain authentic. “The person you are when you order a latte is the person you should be when you are on stage,” Woodberry added. That, along with planning for success and failure, using silence to punctuate central points, using accessible language and of course, practice, practice, practice, and you will be set for success. 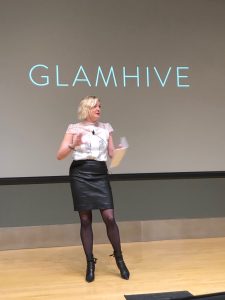 Stephanie Sprangers, founder of Glamhive brought the audience through the three most important lessons she learned on the startup/entrepreneurial journey. First, you just have to make a decision and move forward, no matter what it takes, to make it happen. Glamhive went through a series of ups and downs and changes before becoming what users know it as today. Second, persistence is key because “it’s a total slog.” Finally, luck, which there is a magical quality to. “You have to be the person who has the most excitement, enthusiasm and energy for what you’re doing, because this invariably pulls people in.”

After introducing The Weitz Effect to the audience, Weitz talked about his experience in moving from a talent agent into a celebrity stylist and the way in which personal style impacts personal and professional success. When you only have a millisecond to make an impression, “personal style helps shape others’ perception of you.”

Next, Weitz shared some practical tips and even invited a couple of RSIR brokers to the stage for some real-time advisement. Enrico Pozzo took some tips on tailoring and fit before learning about the staples of a wardrobe, while Randall O’Dowd gained insight on the pocket square — Weitz’s first signature style piece.

Before concluding his talk, Weitz of course gave a few essentials that every man and woman should have in their closet. Every man should own: a navy blazer, a suit (preferably blue in tone), a white crisp button up shirt, a pair of brown dress shoes, a great pair of blue jeans and a streamlined/designer sneaker. For women, it’s a straight leg blue jeans, a pair of black slacks, a black dress, a fitted white tee and a nice pair of closed toe pumps/heels.

At the end of the day, it isn’t about fashion (which Weitz calls a “dirty word”) — it’s about style. We can be our true, best selves when we dress purposefully. Style creates confidence and in turn, feed success. For more style tips and inspiration, follow @theweitzeffect on Instagram.