As Seen in Geekwire

The first new construction “for sale” opportunity in the popular Pike-Pine corridor of Capitol Hill in a decade, homes will range from efficient studios, open one-bedrooms, one-bedrooms and two-bedrooms ranging from 476-sq. ft. up to of 832-sq. ft. offered from the mid-$400,000s to the high $900,000s. Presales will commence in September 2018.

Throughout the project residents will enjoy sun-inspired artisan touches such as sun glazed Spanish tiles and Mediterranean lighting elements. With 3,300-sq. ft. of ground level retail, SOLIS will feature a premier restaurant space boasting a dynamic indoor and outdoor seating with a prime street corner at 13th Avenue and East Pike Street.

The homes will be listed by Dave Janssens, a Senior Global Real Estate Advisor and Managing Broker with RSIR. “SOLIS is just what the market has been waiting for,” said Janssens. “There hasn’t been a new construction, for-sale opportunity on Capitol Hill in a decade and there is pent up demand for attainable home ownership options and an alternative to high-rise living in downtown Seattle.” 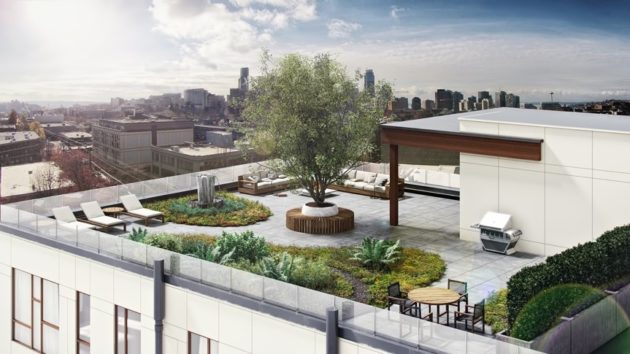 New data released by Realogics Sotheby’s International Realty reports the median home prices of downtown Seattle condominiums have increased by 18% during the first half of 2018 compared with the prior year, with the greatest increases occurring at the most affordable price points within a conforming loan limit where mortgages are less than $667,000 and allow homebuyers to qualify at lower FICO scores, purchase with 3.5% (FHA) or 5% down payments and enjoy generally lower interest rates compared with jumbo mortgages at higher price points. According to NWMLS data, the volume of resale homes sold in downtown Seattle below $600,000 has decreased from 112 units during the first half of 2016 to just 39 units in the first half of 2018 because of the rising home prices and the lack of new construction delivering more efficiently-scaled properties. The supply and demand imbalance has caused the average selling price of resale inventory in the 50th percentile to swell from $622 per sq. ft. to $855 per sq. ft. Meanwhile, recent presales of new construction high-rise properties have been commanding average prices between $1,050 per sq. ft. to more than $1,200 per sq. ft.

Interestingly, a new 60-unit apartment building on Capitol Hill called The Cove at 601 East Pike Street that was jointly built by SolTerra set a record when it sold for $921 per sq. ft. as an income property – the highest price paid for a rental community according the JLL, a commercial brokerage familiar with the transaction.

“We are sensing a significant shift by developers and consumers to favor for-sale development,” said Dean Jones, President and CEO of RSIR. “The reality is the cost of owning is less than renting after only a few years of capital appreciation and income tax deductions for many of our buyers, especially those that secure favorable interest rates. Consider that on a unit basis, if only 5% of the recently occupied tenants of new apartments in downtown Seattle decided to buy instead of rent, we’d be sold out of inventory in our pipeline through 2022.”

SolTerra will offer a limited number of reservations for priority presales in exchange for a $5,000 fully-refundable deposit held in escrow and plans to convert to formal presales commensurate with groundbreaking this Fall. Purchase contracts will require 5% deposits. For more information and to register for reservations, visit: www.LIVESOLIS.com

Want to learn more about how perfect the timing for Solis is? Check out a recent FutureCast Forum piece on the “Seattle Pivot” and what it means for in-city homeownership here.