This piece was originally featured in the Spring 2021 edition of RESIDE® Magazine. Request a print copy or view the digital magazine →

There’s nothing like a Steinway & Sons piano. Or so say the virtuosos who insist on playing this American-made instrument.

Steinway & Sons pianos have dominated concert halls all over the world since the company introduced its first piano 167 years ago, and pianists from every genre, from Lang Lang to Billy Joel, are known for the special relationship they have with this maker.

We spoke with Anthony Gilroy, Steinway & Sons senior director of marketing, about what makes a Steinway.

If you could summarize, what makes a Steinway so special?

The musicality of the instrument is what guides everything we do. If there is a part of the process where an artisan working with their hands gives us a piano with the best musicality, that’s what we do. If there’s an area where the precision of cutting-edge technology can improve the piano, we by all means will utilize that technology.

Why is a Steinway so investible?

Unlike many expensive products, like cars and boats, Steinways are handcrafted and built to last not for years, but for generations. When properly cared for, Steinway pianos provide decades of great music and maintain their value because of their longevity.

Steinway is credited with revolutionizing what a piano is and can be. To what do you attribute this?

The Steinway family had an obsession with improving the instrument. Part of this was a very pragmatic thing. They knew if they built a piano better than the next company—which might have been right down the block as there were dozens of piano manufacturers in New York City at that time—it would increase sales. I think another part of it was the pure challenge of it. They felt it was a challenge to continuously improve the instrument, and that’s something we carry through to this day.

The Steinway Spirio—the company’s high-resolution player piano—seems like a logical next step. What’s been the reaction?

We launched the Steinway Spirio in 2016 and, in four years, it has grown to that point that about half of the pianos being built in our Astoria, N.Y., factory are Spirio. Everyone who witnesses a SpirioSync video, where one of the great pianists of today or from history can be seen playing on-screen, but the piano in front of you is playing every note, is amazed. In 2019 we released the next generation Spirio, which allows you to record a performance (it comes with a full editing suite). While Spirio was targeted at luxury buyers that have a love and appreciation of great acoustic piano music, the latest version is targeted at institutions, recording studios, professional musicians, and serious amateurs who want the ability to record their performances. 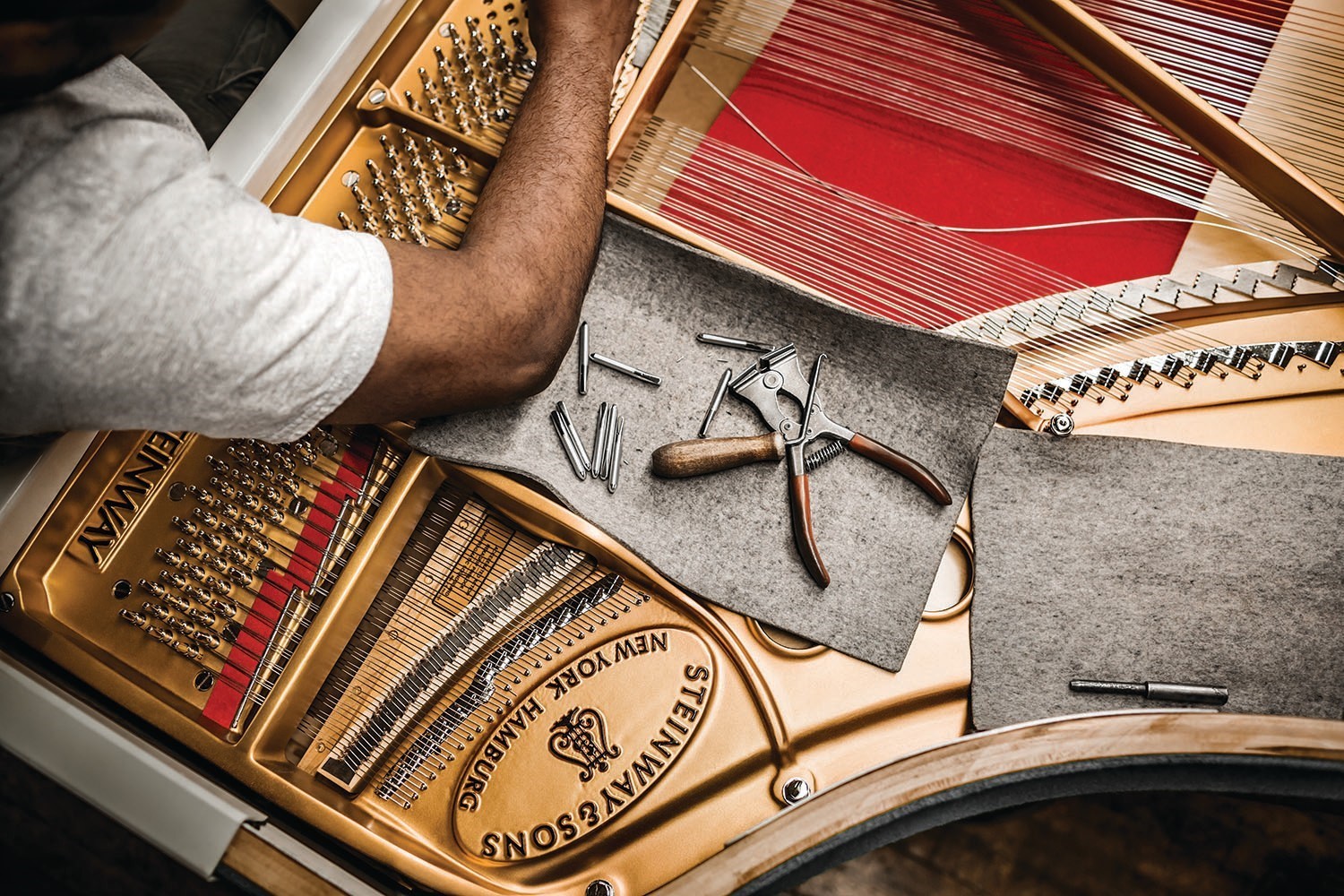 So is an ebony piano a thing of the past?

Although the vast majority of Steinways we sell are still ebony/black, we’ve been selling more pianos in our beautiful, exotic veneers (called our Crown Jewel Collection). Some people prefer a piano in a specific color, while others prefer one of our “Pops” collection, where it looks like an ebony (or white) piano from the outside, but when you prop up the lid and pull down the fallboard, you see a great color juxtaposing with the black or white exterior of the piano. Even among professional pianists, we’re seeing many more looking for unique colors, especially among younger artists.

How did Steinway’s apprenticeship program evolve?

We started the formal program in 2019, then things got a bit sidetracked with the pandemic, so we’ve so far had just one class of apprentices. The idea is that each apprentice spends time in every major department within the factory, so they can get a holistic knowledge of the piano-building process. We have had more informal apprenticeships happening in our factory for decades. There are many, many stories of people starting with a task like sweeping the floors or a fairly basic and simple (though still important) part of the process and working their way up.

How has the company handled Covid-19?

We’ve partnered with MusiCares on a number of initiatives, most recently with a piano that was played and signed by Alicia Keys and auctioned off to benefit that cause. In terms of Covid-19, our factory was closed from mid-March through mid-July, but we have been back at full production since then.

Finally, what’s the best customer feedback the company has ever received, either from an amateur or professional pianist?

With 167 years in business it’s very difficult to pick a “best.” But some of what we really love to hear is when customers talk about their Steinways becoming a part of their family.