Just one month ago at the Realogics Sotheby’s International Realty Eastside Gateway Branch in downtown Kirkland, a collective of brokers came together for a Market Fundamentals and New Development Summit, outlining the latest market and new development trends in Seattle and the Eastside.

Brian O’Connor of O’Connor Consulting Group, kicked things off with an analysis of our housing cycle, comparing demand between homeowners and renters. Apartment demand is falling fast, plummeting a staggering 50 percent last year, while the desire to live in urban areas is growing.

According to O’Connor’s research, the city of Seattle generated 35% of new jobs in the current cycle but captured 60% of apartment demand. And as condominiums increasingly appeal to first time homebuyers and millennials that prefer to live in close proximity to job centers, new development projects will remain concentrated to Seattle and the Eastside.

“Bellevue is open for business,” O’Connor proclaimed, as he outlined two recent site purchases by Vulcan that are speculated to be future Amazon office buildings. Given his familiarity with new development, he said it wouldn’t be unreasonable to see 4,000 to 5,000 Amazon employees added to downtown Bellevue over the next four years and that we may even move to a point in which Amazon is adding more Bellevue employees than Seattle.

Nationally, O’Connor says single-family home construction is flatlining—consumers are laying down roots in urban settings to be closer to job centers, retail and entertainment, and more affordable multi-family housing. The Seattle Pivot overtook much of the conversation, as developers are rising to the demand for condominiums—and their potential to yield roughly double that of an apartment project—and shifting from rental to ownership opportunities, even mid-construction.

Next up was William Hillis, Research Editor & Publisher at RSIR, who discussed the June S&P Case-Shiller Home Price Index, in which Seattle fell to the second spot, just behind Las Vegas. He said that while it may seem daunting that Seattle no longer holds the number one place for growth, the same dynamics are still in place, as year-over-year growth remains above 12 percent.

Hillis measured data on a half-annual basis, looking at trends from 58 sub-markets. He says that overall, high-end homes (priced above $1M) are experiencing waning market times (of about a week or so), that the median cumulative days on market in Seattle has been reduced to about a week, and noted that smaller cities are much more subject to seasonality.

Finally, it was time for Dean Jones, Owner & CEO of RSIR to take the stage, as he introduced an updated New Construction Condominium Deliveries and Sales Status chart that truly highlights the condo comeback and the new deliveries in the coming years. Jones also introduced a number of new projects, many of which may be found at UrbanCondominiums.com.

Jones, who tracks new construction condominium deliveries closely, says he’s excited about recent activity and the pivot trend, but added that “if just five or six percent of the people that have chosen to rent since 2010 decided to buy, we would be effectively sold out on a unit basis through 2023.” 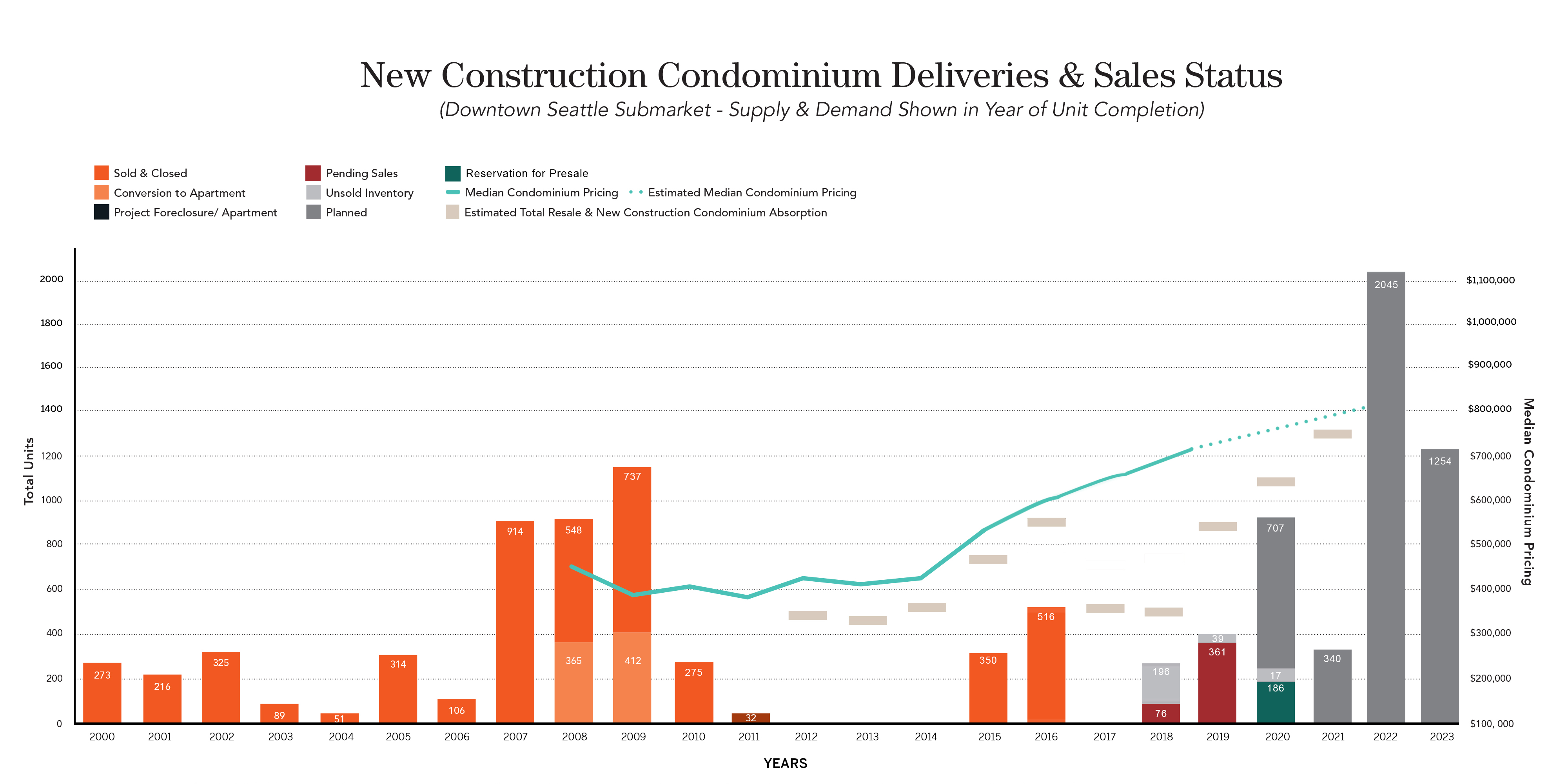 The graph outlines a stark difference between 2011 and 2016, in which there were either no or very limited new condominium deliveries, and the “condo comeback” of 2017 and beyond.

So, what’s next? Jones says multi-family housing will remain concentrated to Seattle and larger Eastside cities—think Bellevue and Kirkland—with wood frame condo buildings making a comeback and perhaps a few more of those pivots, too.