Home prices on the West Coast continued to rise through November 2018, though not at the pace seen in recent years. That is the takeaway from S&P/Dow Jones’ release of the latest Case Shiller Home Price Index. The November 2018 report showed Seattle restored to the three leading regions in the U.S. for residential price growth, with San Francisco falling out of the top six.

According to the official S&P Dow Jones press release: “Las Vegas, Phoenix and Seattle reported the highest year-over-year gains among the 20 cities [tracked by Case Shiller]. In November, Las Vegas led the way with a 12.0 percent year-over-year price increase, followed by Phoenix with an 8.1 percent increase and Seattle with a 6.3 percent increase. Seven of the 20 cities reported greater price increases in the year ending November 2018 versus the year ending October 2018.”[1] San Francisco grew at 5.6 percent year-over-year, a 0.7 percent monthly decline that knocked San Francisco out from among the top cities.

Year-over-year home price advances in the City by the Bay had surpassed those of Seattle for months until November’s result, as seen in the chart below. Meanwhile, yearly gains in Los Angeles have lagged those of both the aforementioned cities: 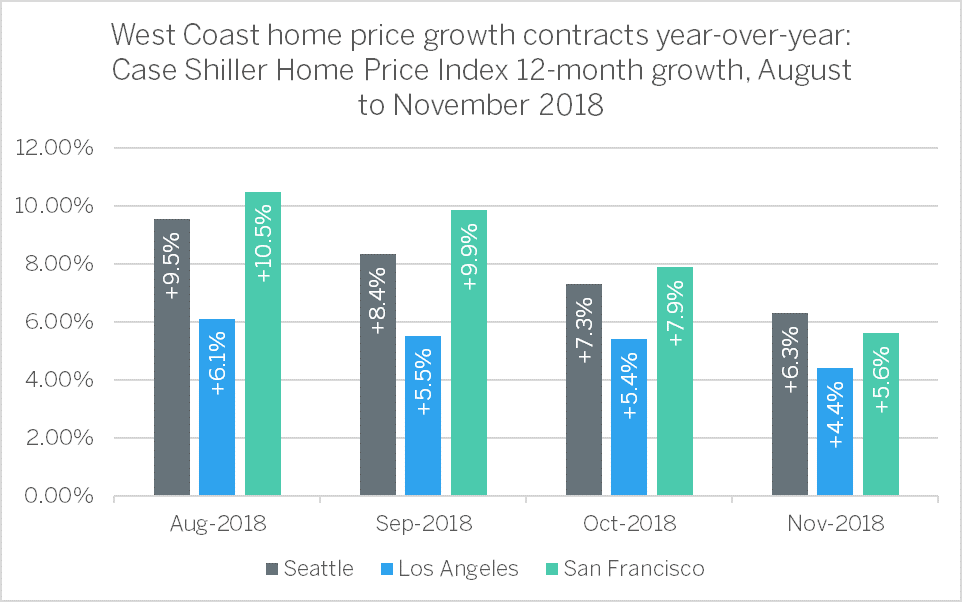 Housing market conditions are mixed while analysts’ comments express concerns that housing is weakening and could affect the broader economy. Current low inventories of homes for sale—about a four-month supply—are supporting home prices. New home construction trends, like sales of existing homes, peaked in late 2017 and are flat to down since then. Stable two-percent inflation, continued employment growth, and rising wages are all favorable. Measures of consumer debt and debt service do not suggest any immediate problems.

Key to understanding what is happening with residential prices is that, recent newspaper accounts to the contrary, prices have continued upward in Seattle, as well as in all other cities tracked by the Case Shiller Index. Prices were higher even where they were most sluggish to rise. San Diego, Chicago, and Washington, DC showed the smallest 12-month increases, at 3.3 percent, 3.1 percent, and 2.7 percent, respectively.

Locally, in King, Pierce, and Snohomish Counties—the three counties comprising the Seattle Metropolitan Statistical Area in which resold residential prices are factored by Case Shiller—prices never sank below their 2017 monthly marks. Only King County (inclusive of Seattle) ended December 2018 without a year-over-year price gain on the month.[2] 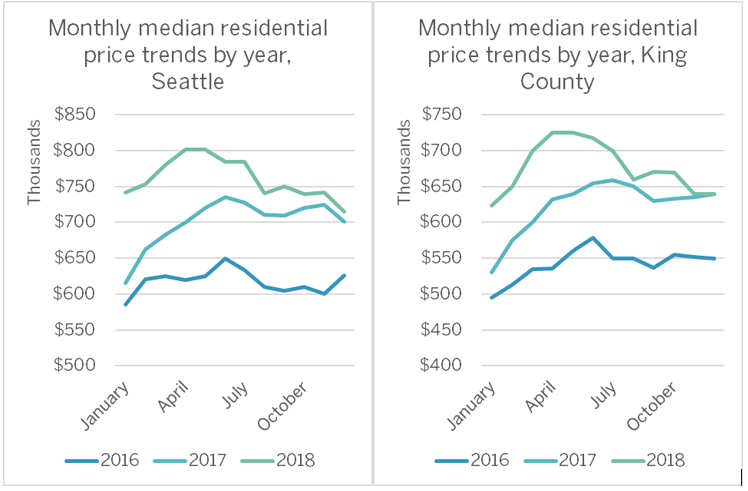 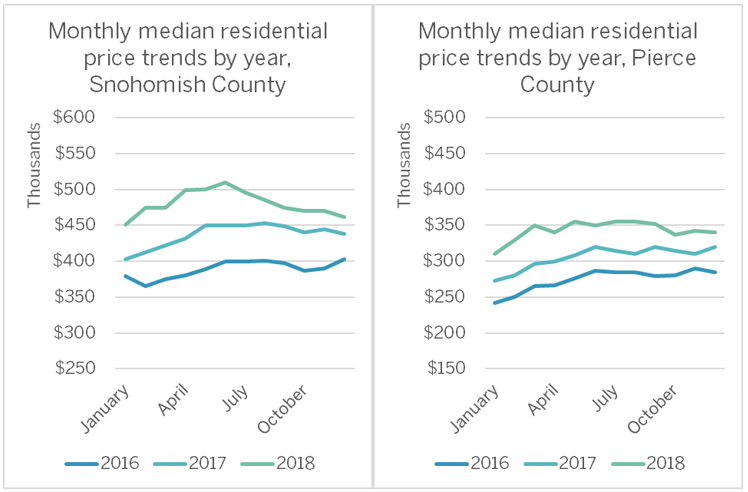 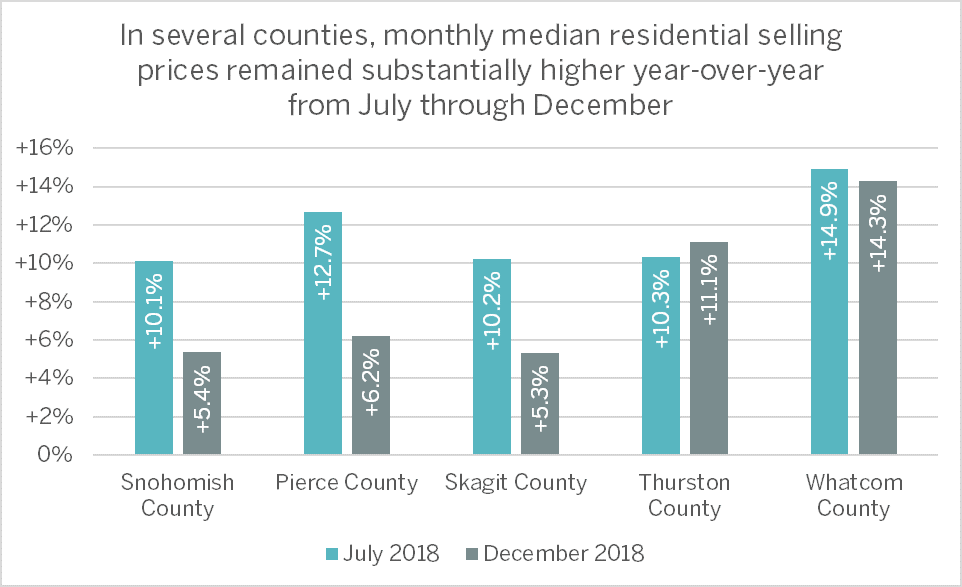 We end this update with our illustration of the trend for the 12-month gain on the Case-Shiller Index. It shows the slope in Seattle price growth encountering resistance from below, while those for Phoenix and Las Vegas lose upward momentum, and the downturn for San Francisco intensifies. 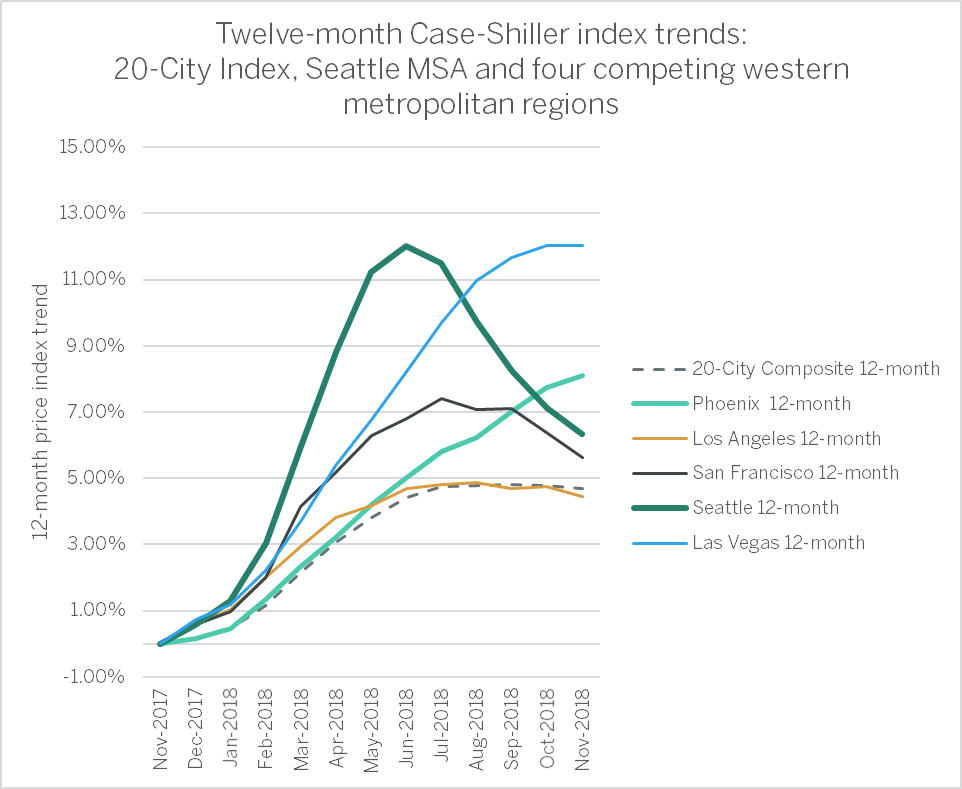 For more details on the November Case Shiller Index results, download the S&P Dow Jones Case-Shiller summary report. For details on the implications for homes in your neighborhood, contact a local RSIR broker for their latest analysis.