Seattle has cemented a new nickname for itself: the “crane capital of America,” as Seattle Times reports that for the third consecutive year, the Emerald City has more cranes dotting its skyline than any other major city in the U.S. This news comes with the release of new data by Rider Levett Bucknall, which provides an update on the number of cranes in all major cities around the world twice a year. 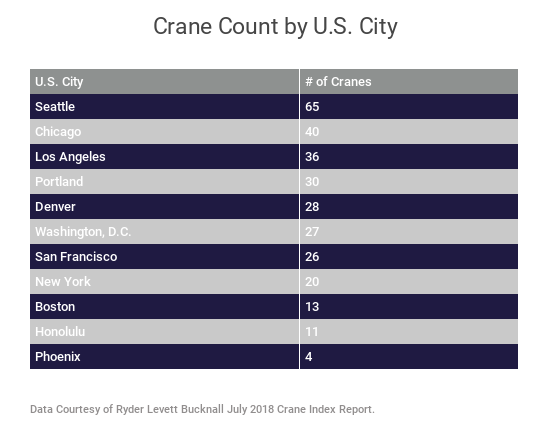 Seattle’s crane count was double that of nearly every U.S. city surveyed by Rider Levett Bucknall, with the exception of Los Angeles and Chicago.

After hitting a low point in crane counts in the second half of 2017, many were asking how did Seattle rebound so quickly? As the Times writes, “it turns out that an unusually high number of projects happened to wrap up all around the same time toward the end of last year, before the last crane count was conducted.” That provided an apparent lull in the last report, but now with many developments currently under construction, numbers are back up.

Looking at how crane counts break down by neighborhood in Seattle, South Lake Union is a clear locus of new development with 17 cranes, which indicates how influential the growth of companies including Amazon, Facebook and Google has been on the area with the need for both office space and housing options. 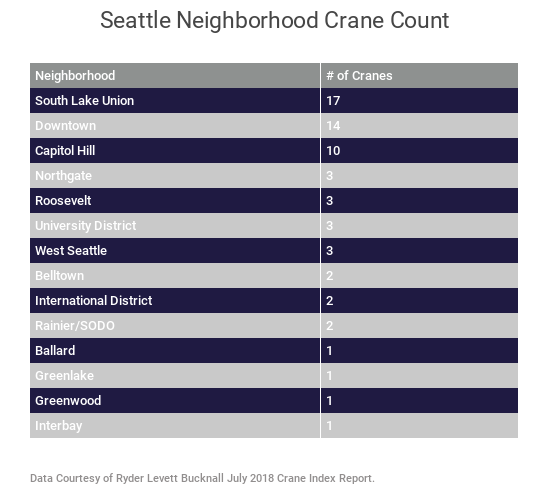 Of the projects in the Emerald City, Seattle Times says 27 are mixed-use (residential + retail), 17 are residential and 11 are commercial projects (office space).

So, you may ask, is there anywhere in the city one can drive without bumping into a crane? According to the Times, residents will be hard pressed to find neighborhoods without them, but a few areas including Madison Park, Magnolia and Fremont are currently “sans crane.”

Though Seattle tops the nation in crane counts, those numbers still pale in comparison to cities around the world, with Dubai at 1,182 cranes, Sydney at 346, and Toronto leading the count in North America at just under 100.