When considering a second home destination, it comes as no surprise that location is a key factor in buyer decision-making patterns. According to a National Association of REALTORS® report released earlier this year, waterfront homes were among the most coveted vacation properties, representing 51% of buyer’s top desires (with 33% preferring beachfront and 21% looking at lakefront). While many in the Pacific Northwest look to areas such as the San Juan Islands to fulfill their second home needs—in locales such as San Juan Island’s popular Friday and Roche Harbor, and beyond—savvy buyers are also heading further north, to fabulous locations such as Victoria, British Columbia, to satisfy their vacation home tastes. In this Second Home Spotlight, we have a look at Urban Masterpiece, a spectacular waterfront home awaiting its next steward.

This bespoke contemporary oceanfront home was masterfully created from steel and concrete under the guidance of Victoria’s premier architect, Peter de Hoog. It offers the discerning buyer unmatched quality and the opportunity to make their own rules in an exceptional vacation home. 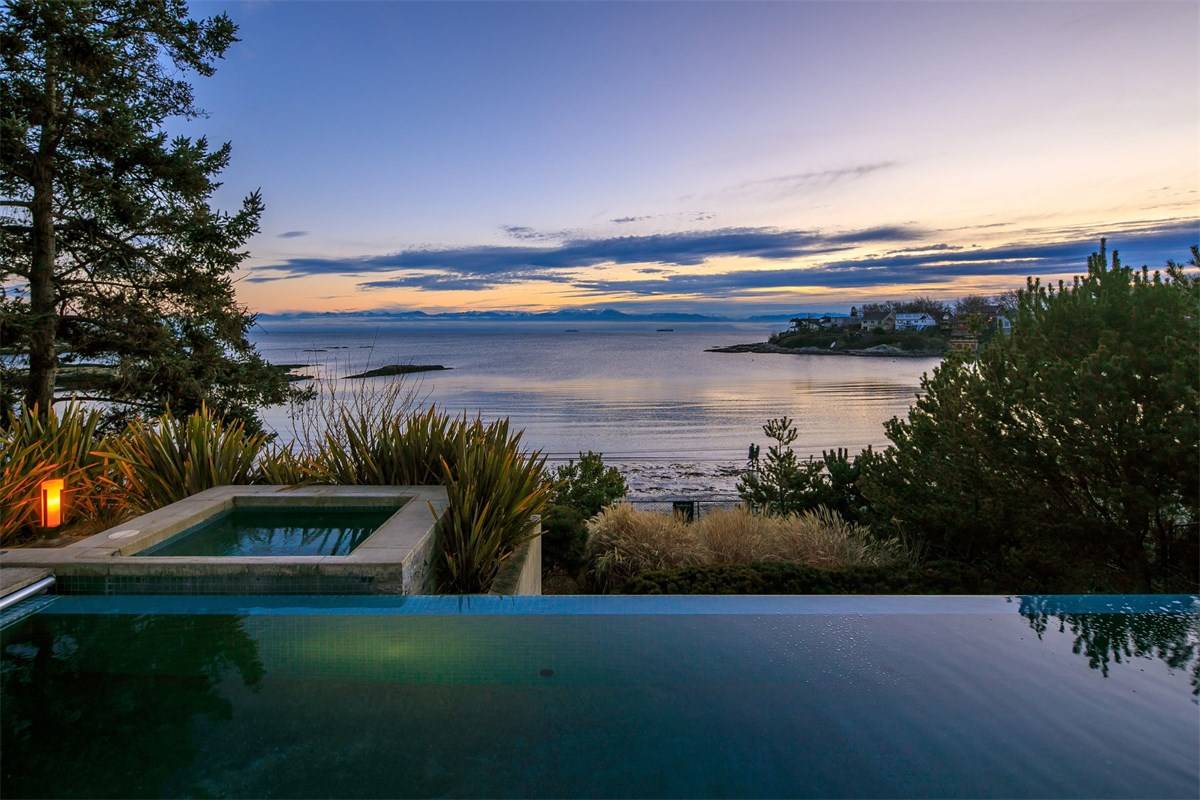 A prominent Gonzales Bay location feels a world away from it all yet remains just 10 minutes from downtown Victoria, B.C.

Perched above Gonzales Bay, Urban Masterpiece is less than a ten-minute drive from Victoria’s downtown core, where residents and visitors enjoy stellar restaurants and cafes, gardens and parks, festivals and events, craft beer, wine and spirits, and renown attractions such as Butchart Gardens and Craigdarroch Castle. Its close proximity to urban amenities is one of the reasons the property stands apart from other second home destinations on the West Coast.

“While destinations such as the San Juan Islands and Gonzales Bay both afford a supreme waterfront lifestyle, only the latter is graced by seamless access to an established city with a full suite of amenities,” says Dean Jones, President & CEO, Realogics Sotheby’s International Realty. “Victoria feels like it’s a world apart from the Seattle area, yet is actually quite convenient to access via Kenmore Air float plane service or the Victoria Clipper via fast ferry. It’s a slice of Europe right here at home.”

Residents of Gonzales Bay may be found engaging in the same aquatic activities as those on other West Coast waterfronts, whether it’s strolling along the sandy beach, boarding a kayak or stand-up paddleboard in the protected waters, or taking advantage of some of the most amazing yachting destinations in the world. Yet, as Jones notes, “this particular property also presents a unique value proposition at a fraction of the replacement cost found in other West Coast peer markets.”

Though waterfront residences on San Juan Island sold at an average of just under $1M USD in the first half of 2018, residents of the northern region of Washington state lack the access to an established city that may be found in Victoria. Looking further south, to the shores of Lake Washington, prices of active listings easily exceed $2,000 USD per square foot on the “Gold Coast” within coveted enclaves such as Medina, Hunts Point, Yarrow Point and Beaux Arts, well above the asking price of Urban Masterpiece, at $920 USD per square foot.

The above home in Medina, Washington, represented by RSIR brokers Mary Nelson & Kathy Madsen sold earlier this year for just over $1,400 USD per square foot. 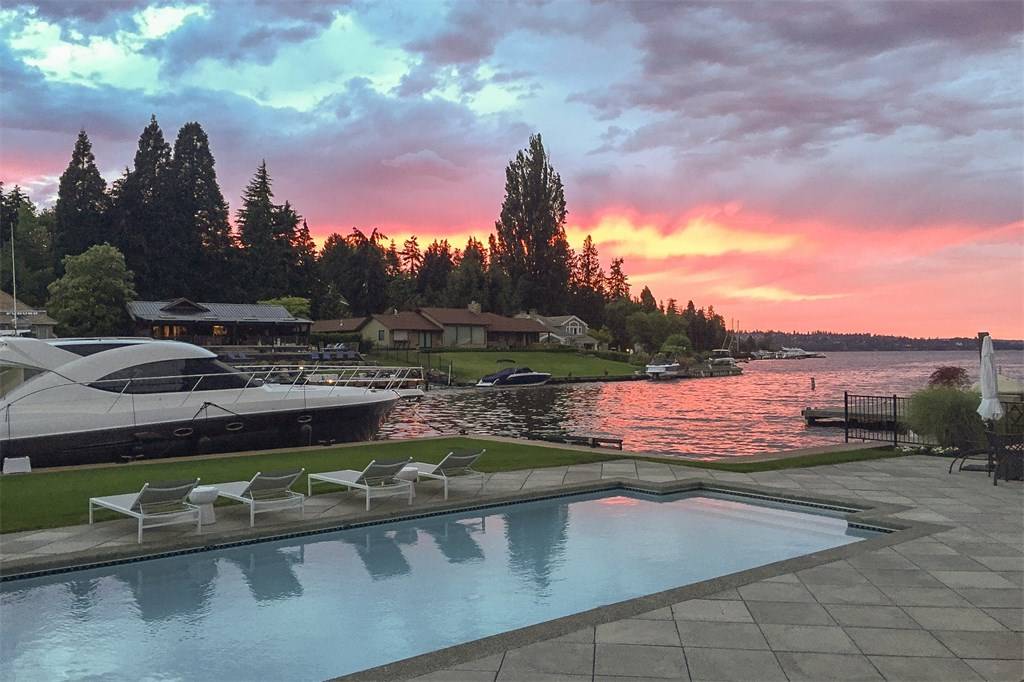 The modern waterfront home in Hunts Point above is currently listed by RSIR broker Yvonne Lindbom with an asking price of $5,600,000 USD.

Moving even further south, Shen Schulz, a Malibu-based real estate agent with the Sotheby’s International Realty Malibu-Point Dume Brokerage, says “if this home were located on the oceanfront in Malibu, it would easily exceed $10 million USD in value.”

Though buyers from outside of Canada may be wary of the Foreign Buyer Tax imposed by the British Columbia Government, it should be noted that U.S. buyers will effectively feel its impact cancelled out after accounting for exchange rate benefits, which heavily favor the U.S. dollar right now. 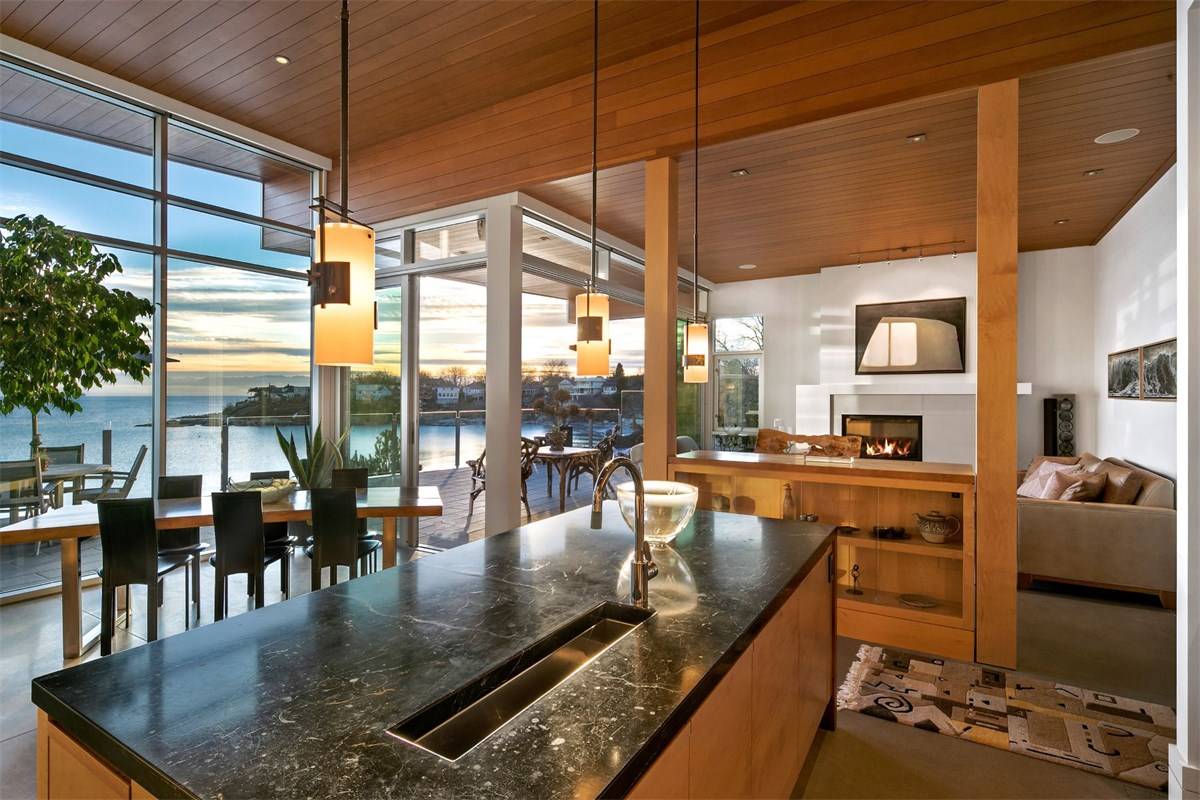 A future Victoria icon, this tactile home demonstrates the finest quality of finishes which were sourced locally where possible and finished by the finest craftsmen available; exposed hand-polished architectural concrete surfaces accented by pillars of white maple veneer, furniture grade millwork, antique marble counters, floors of polished concrete, terrazzo and wood. Together with a lock-and-leave lifestyle afforded by the home, this property encapsulates all one needs for a second home lifestyle.