Consistent with demographics and other trends described in the narrative account provided in our RSIR annual report published in April 2020, the transformation of the Seattle City Council has resolved in favor of Kshama Sawant and her leftist allies. The gap between primarily neoliberal homeowners and major employers on the one hand, and renters, advocates, and the Council on the other, has now produced a package of policies and legislative acts far more radical than the version of the “Amazon tax” that the Council first enacted in 2018. This assortment of policies includes the new Amazon tax, as well as other, more extreme measures. On September 22, the Council voted to overturn Mayor Jenny Durkan’s veto of a measure to defund the Seattle Police Department.

Predictably, as their own collective political action has not succeeded in diverting the SCC from their course, some homeowners and businesses in Seattle are eyeing relocation. The most accessible and arguably least disruptive move for many is across Lake Washington to Bellevue, Kirkland, Redmond, or Mercer Island. In February, Amazon announced their intention to “bring 15,000 jobs to Bellevue,” and in September said that they would add 10,000 more to that figure “in the next few years.”[1] The analysis below compares the current market served by Amazon’s archipelago of facilities at South Lake Union in Seattle, and the market that is destined to be served by their new facilities at Downtown Bellevue. The potential impact of such a move will be magnified by commensurate transfers of allied professional and retail business operations to the Eastside.

This shift may be imminent, but it has not yet begun. Despite the havoc caused by COVID-19 restrictions and unrest in the city of Seattle, this market has shown its resilience this year, with decreasing expirations of listings and renewed competition among buyers for homes. However, those buyers who opt to beat the rush to the Eastside will find similar conditions there, amid a market where homes scarcely sell for less than a million dollars.

According to the U.S. Census Department, the average commuting distance among workers in the Seattle metropolitan area is 28.4 minutes. The map below shows a commuting radius of 20 minutes. This does not comprise the amount of time required to exit one’s home or office, navigate parking facilities, traffic signals, and occasional roadway incidents. We assume that most healthy workers who need to commute will prefer to do so within 20 or 30 minutes. The 20-minute radius also more effectively illustrates the differences in the nearest residential areas available to employees at or near the current Amazon headquarters in South Lake Union, and at their prospective facility on West Main in Bellevue. Accordingly, those locations are set at the center of the two overlapping commuting radius patterns shown below in Map 1.

Map 1: The 20-minute commuting pattern to Downtown Bellevue (YTD 2020 listings shown in red) covers nearly all of Bellevue, as well as much of Mercer Island, Kirkland, and Newcastle. The equivalent commuting pattern to South Lake Union (listings shown in blue) covers a more compact area of Seattle. Between the two is an overlapping area comprising Central Seattle (listings shown in purple, from Capitol Hill to Leschi, and Madison Park to First Hill), as well as Medina, Clyde Hill, and Yarrow Point on the Eastside. 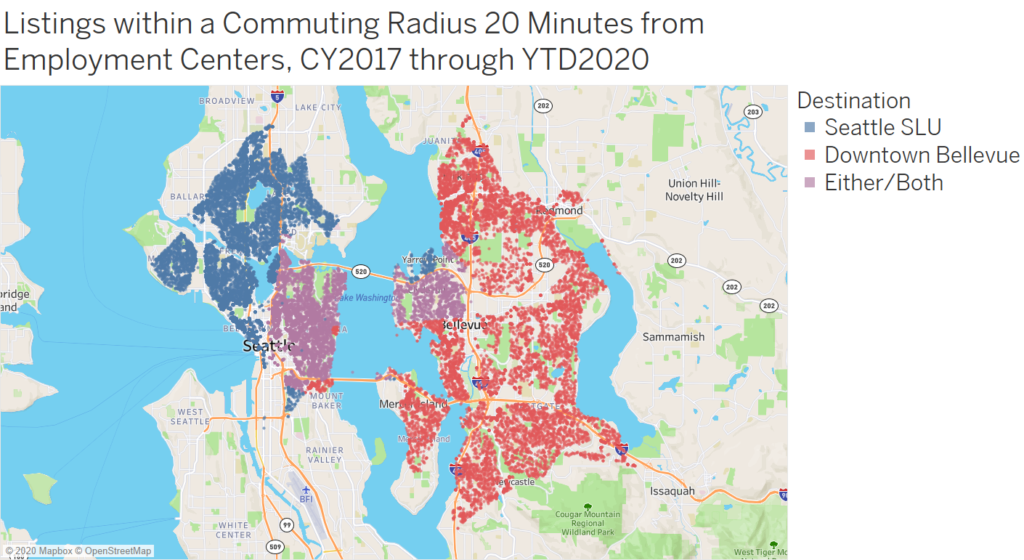 Map 2: In Seattle, expirations of listings in the first eight months of 2020 were down sharply from the equivalent period a year before. Among those expired after sellers’ price reductions of nine percent or more, there were 73 in CY2019, only 13 in YTD2020. 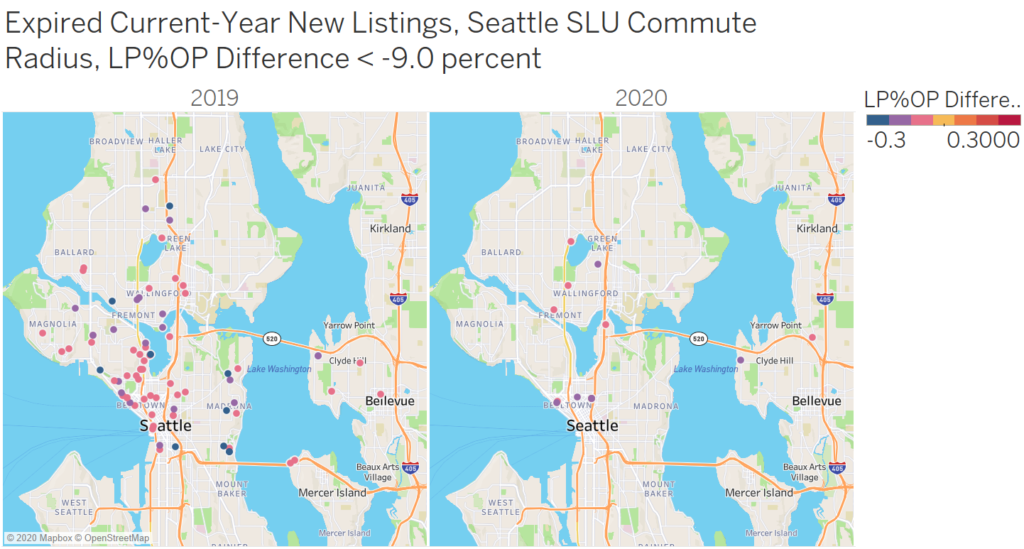 Map 3: Also in YTD2020, there was a substantial increase in sales of listings that were new in those first eight months compared with CY2019 sales in the matching period. In Seattle, the following clusters of transactions saw buyers bidding prices up by 7.5 percent or more from the sellers’ offered prices in Phinney Ridge, Green Lake, and Wallingford, as well as between Montlake and Madison Valley. 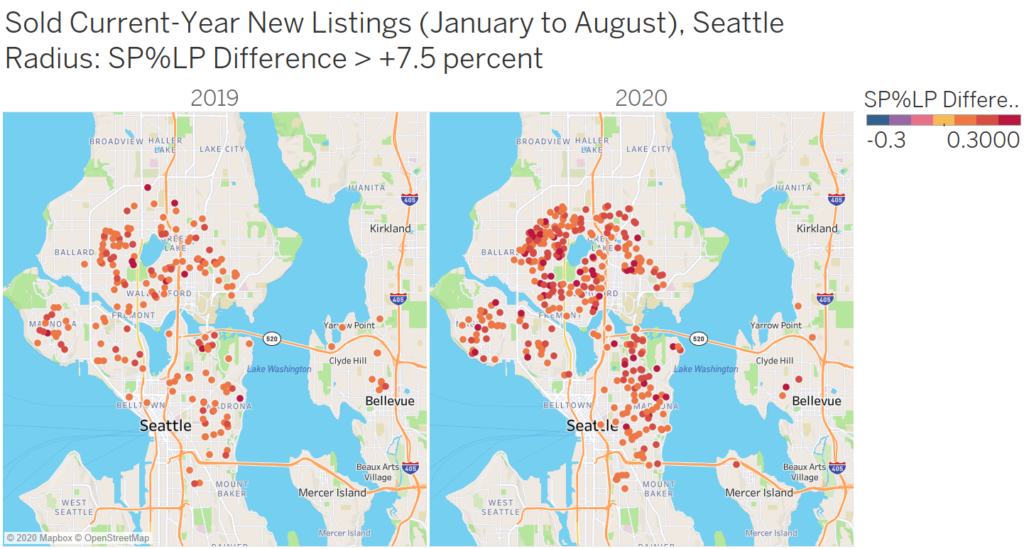 Map 4: The same phenomenon was evident on the Eastside. Among the transactions shown below with selling price increases of 7.9 percent or more from the listed price, observe the concentrated arc of home sales from Kirkland, through Overlake and Kenilworth, down to Lake Hills and beyond. All listings shown are of residences and condominiums within a 20-minute commute of Downtown Bellevue. 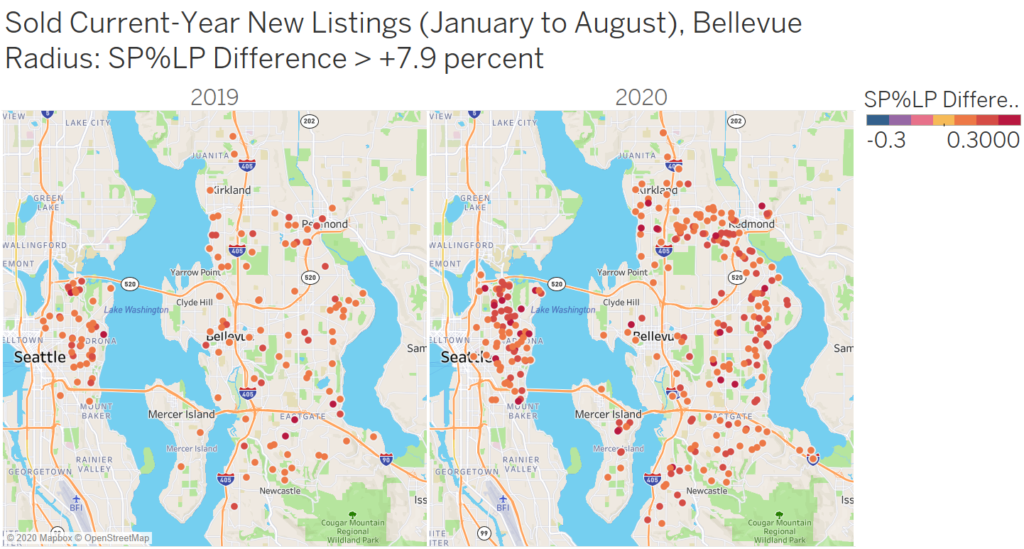 Chart A: Within the commuting radius of South Lake Union, there were fewer listings in most of the listing price brackets below in 2020 than in 2019, but more new listings between $1 million and $1.5 million. 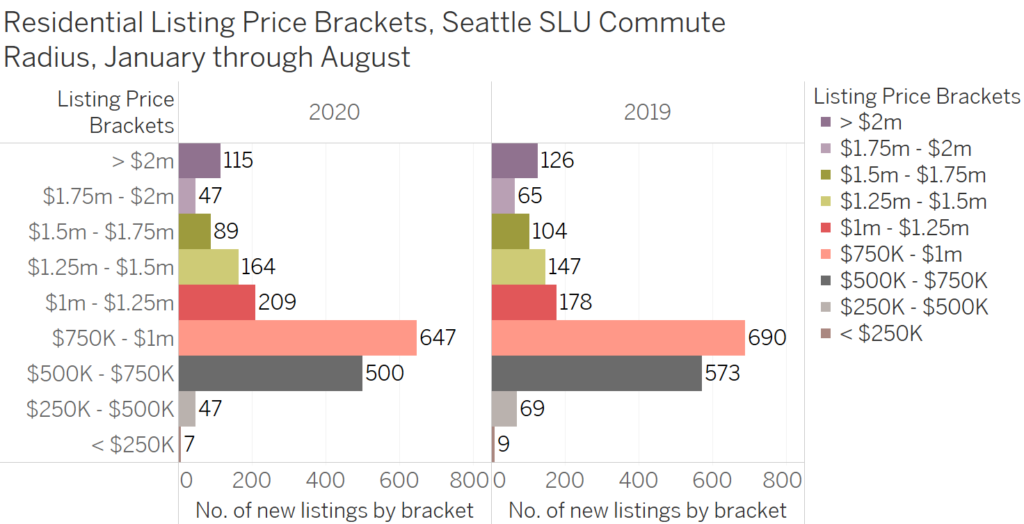 Chart B: The listing price results on the Seattle commuting side were mirrored by the selling price results in YTD2020, but the proportion of sales in that same $1m-$1.5m range were even more sharply higher (+41.8 percent). 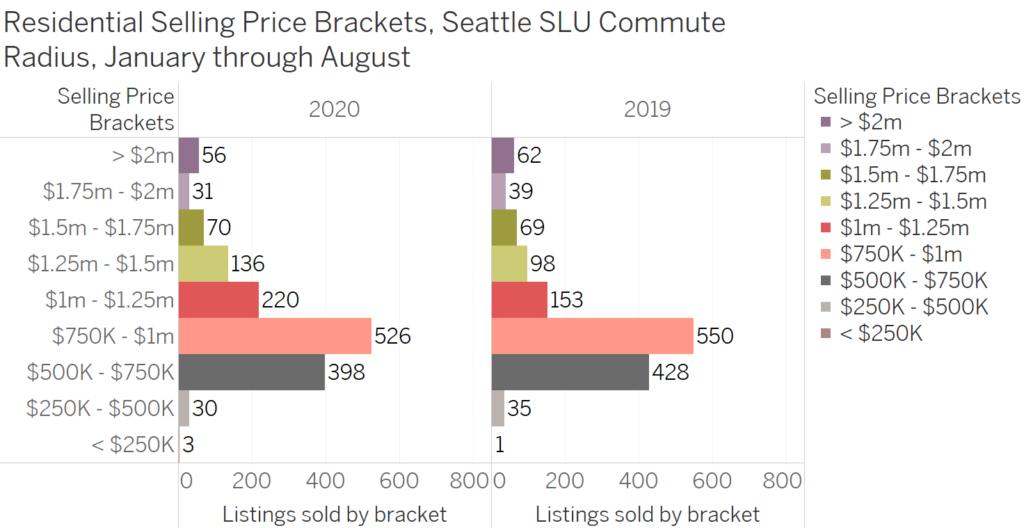 Chart C: (Bear in mind the overlap between these two charts and the preceding charts that results from the area shared between both commuting radii.) Note that within the 20-minute radius to Downtown Bellevue, there are only a handful of listings annually at prices below $500,000; yet the number of listings at prices north of $2 million exceeded by 2.7 times those on the Seattle side.

Chart D: As will be seen in the selling-to-listed-price deviation chart (see Chart G below), homes priced in the middle have tended to sell at or slightly above their listed prices, while those at the top end are more likely to be negotiated lower. On the Eastside, the market will struggle to meet the demand for homes priced below $1 million for staff relocating from Seattle, and especially for retail and services industry employees.

Chart E: This chart and the next two put the counts of listings and sales from the two distinct areas and the shared commuting range next to each other for better comparison. The overhanging count of listings and sales in Seattle below $1 million illustrates the market gap that may translate into an inventory shortage if relocations to the Eastside increase. That gap will need to be closed by new residential and condominium investment. 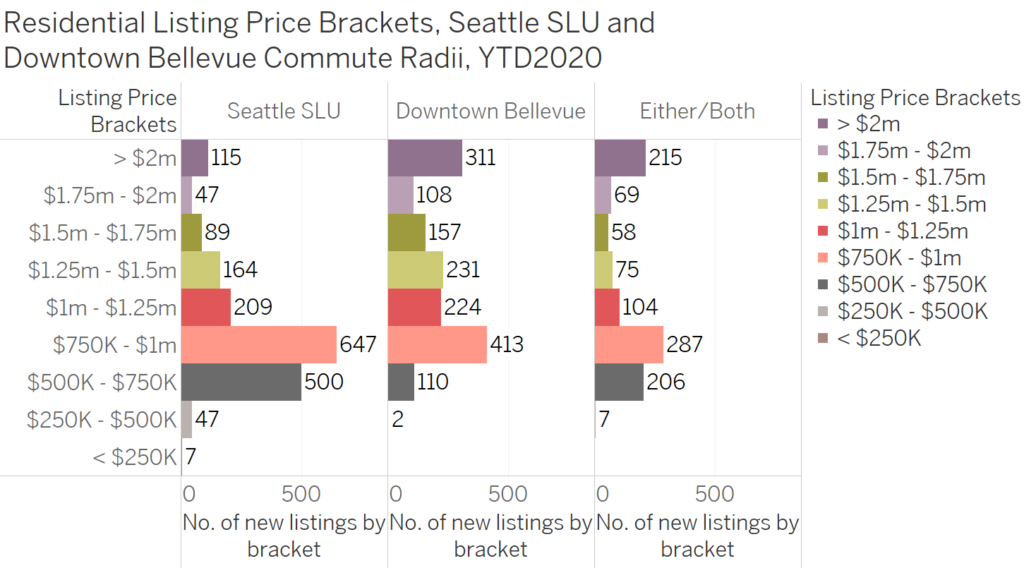 Chart F: Here again with residential sales, note the gap between the Seattle and Bellevue side commuting ranges at and below $1 million, especially among transactions below $750,000. 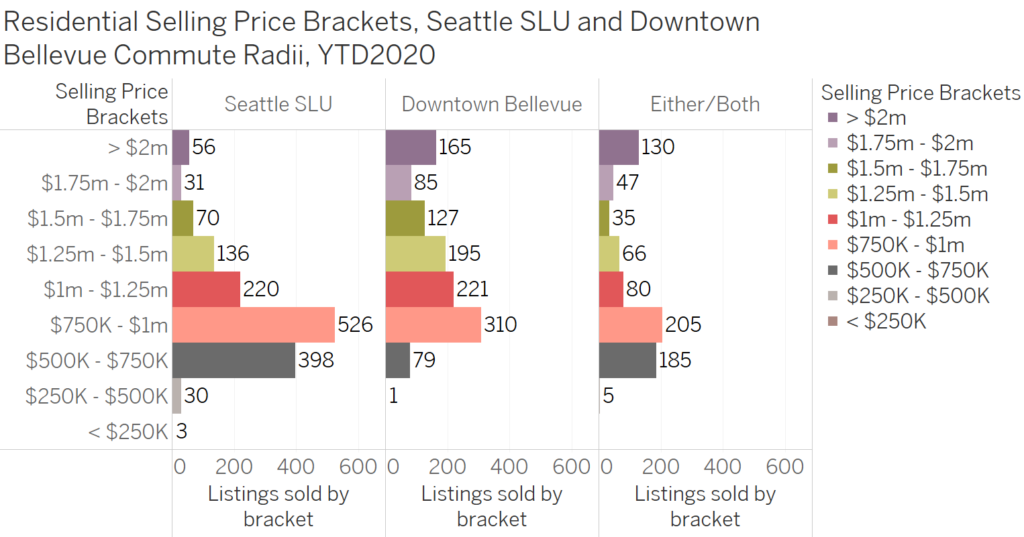 Chart G: As noted earlier, homes priced in the middle tend to receive their bids, while sellers of homes priced at the top of the market are more likely to make concessions before sale. 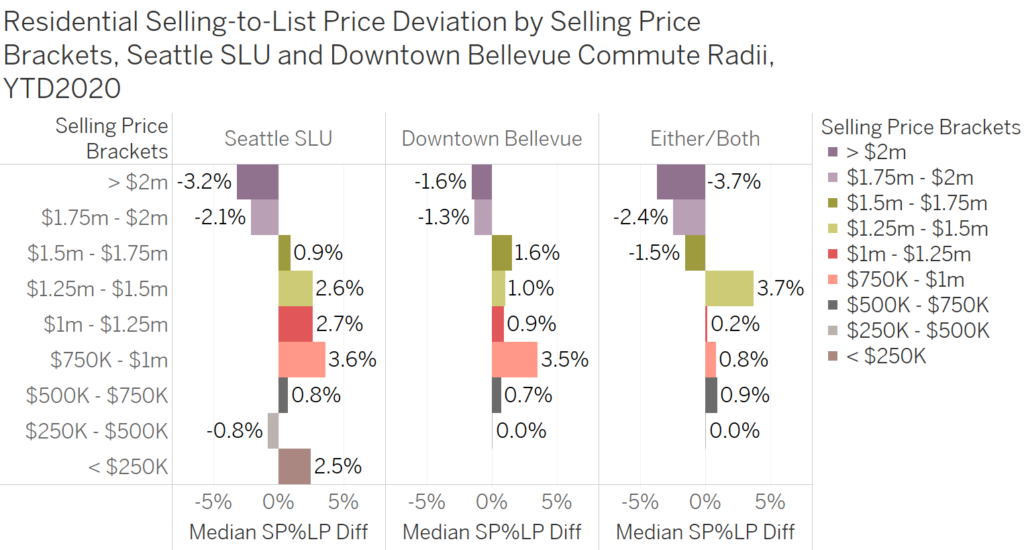 Chart H: The next three charts concern condominium sales in the same three areas. Observe that although the difference in the numbers of condominium units listed for sale below $1 million is not as stark as for residential home listings, it still is insufficient to meet demand in the event of an exodus of workers from Seattle. New inventory will be required. 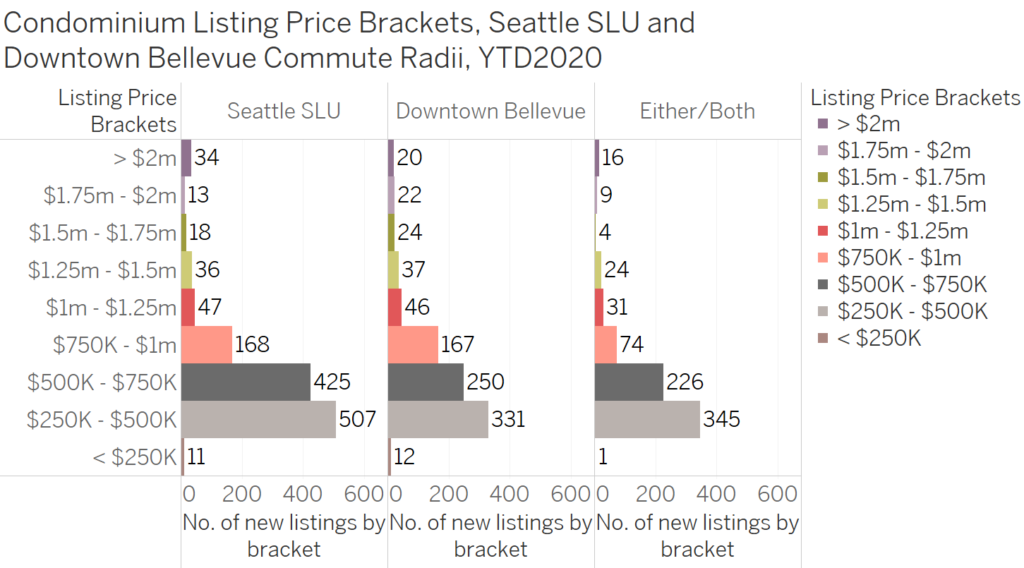 Chart I: Note that in the aforementioned price brackets, condominium units for sale on the Eastside are already closing at higher proportions than units listed on the Seattle side. 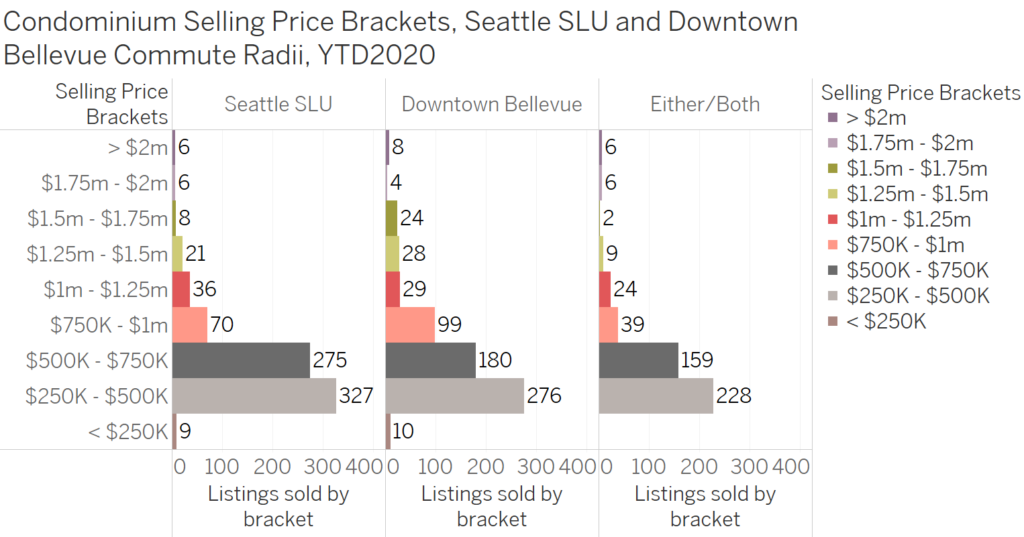 Chart J: The comparatively low numbers of condominium units listed and sold at the higher price brackets reduce the utility of this chart for gauging buyer competition for units above $1 million; but note that on the Eastside, the lower-priced units tended to sell at or above the seller’s ask. 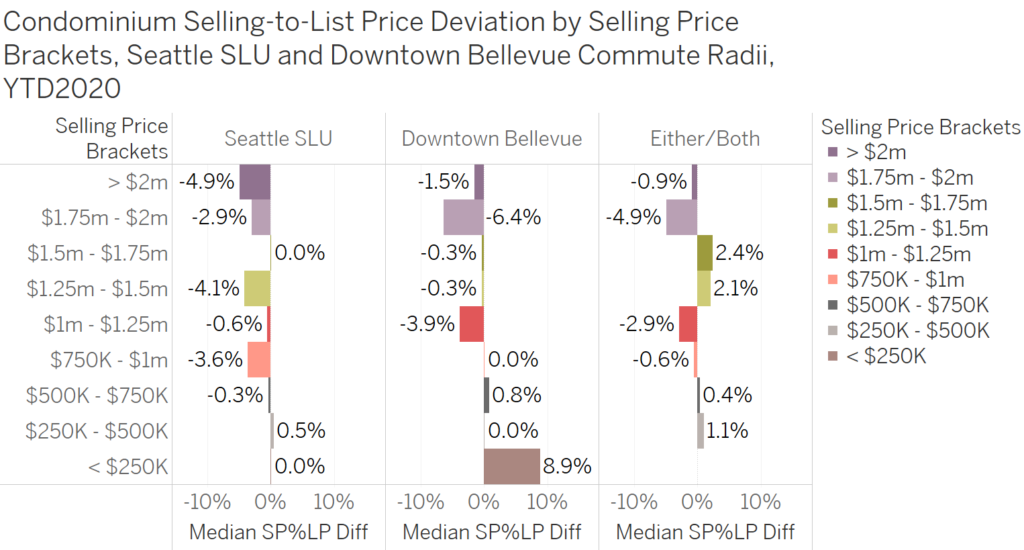 Chart K: The next five charts examine selling trends of the past few years in the three areas (within the exclusive commuting ranges of South Lake Union in Seattle and of Downtown Bellevue, and the area of commuting origin shared by these two). The value concentrated in the purple area suggests that buyers there are not only making a quality-of-life choice; for senior executives and entrepreneurs, purchases in this area might also be a hedge against a career shift that relocates one’s work from one side to the other. 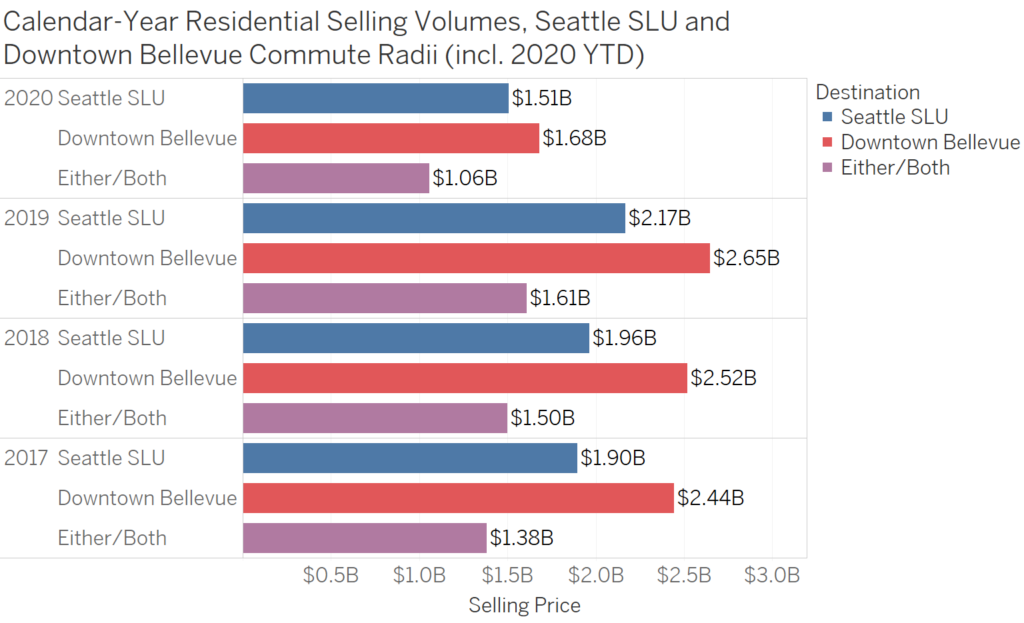 Chart L: Selling transaction counts have been steady between the two commuting radii; but as seen among the previous charts, this similarity hides differences in the prices and values of homes available for sale. 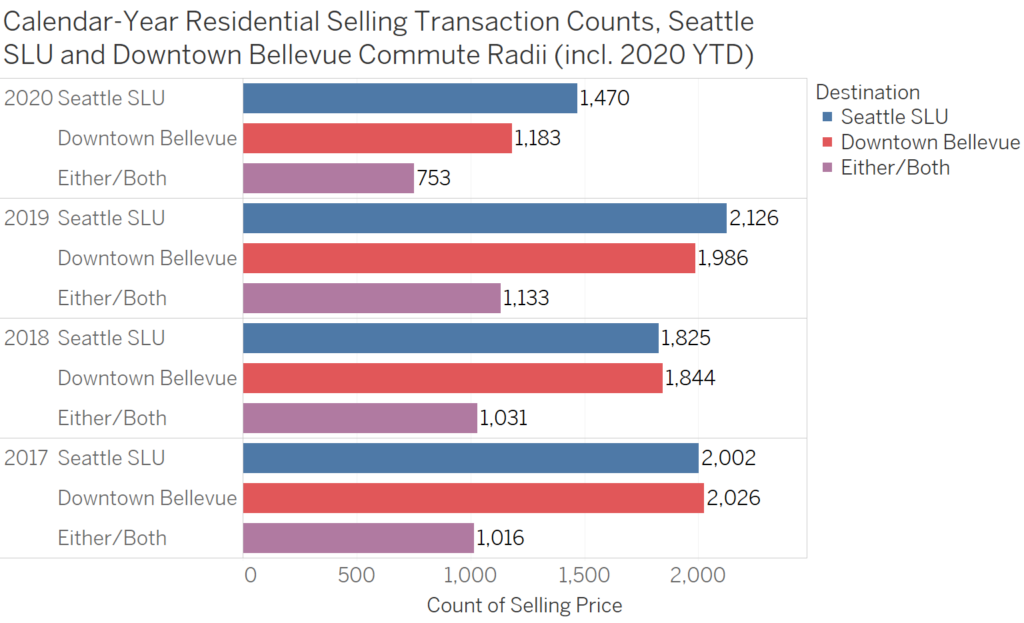 Chart M: The median price of homes sold in the exclusive commuting radius to Bellevue has been rising, not only in proportion to prices in the Seattle radius, but to the high-value, high-profile area that serves both employment centers. 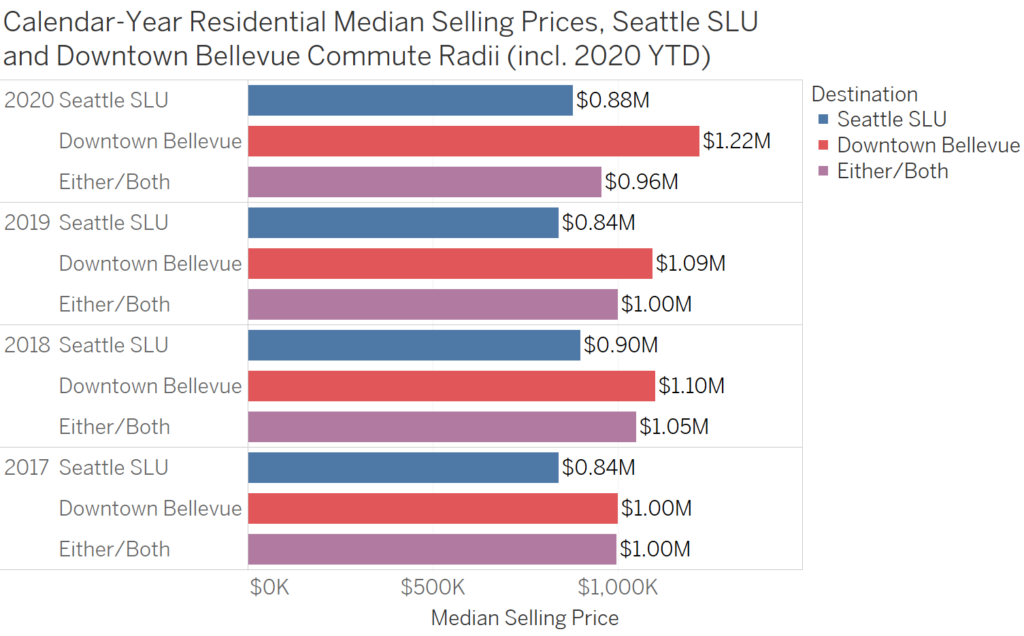 Chart N: Residential times on market slowed sharply in 2019; but despite onerous restrictions on selling activity in the wake of COVID-19, sales in all three areas came roaring back in 2020, and CDOM accelerated once again. 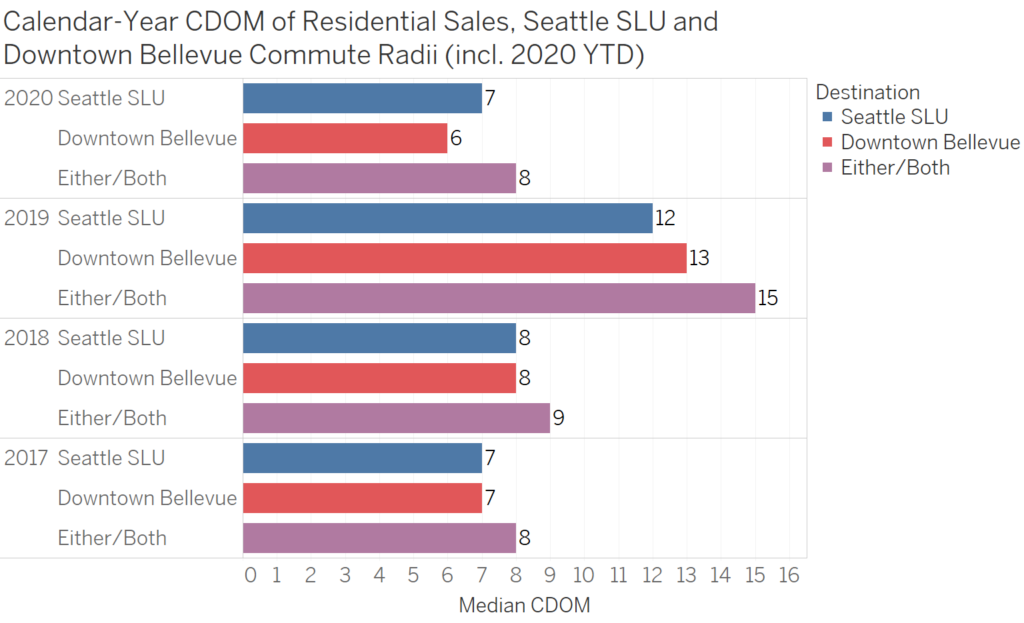 Chart O: Among homes that did not sell, the seller’s time on market before withdrawing a listing ranged from a median six weeks to three months on the Eastside in 2019. Seller contracts should be drawn to allow ample time for their brokers to promote and close each listing. 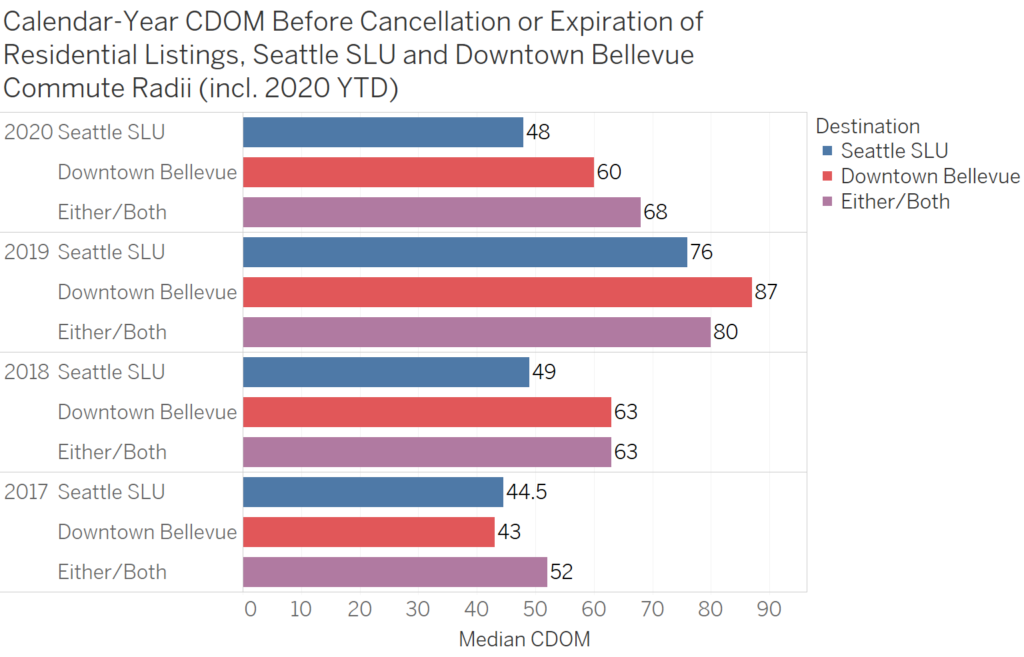 Chart P: Homes offered for sale on the Eastside have been proportionally more likely to be owner-occupied at the time of sale, although the difference in proportions between the two sides has recently narrowed. 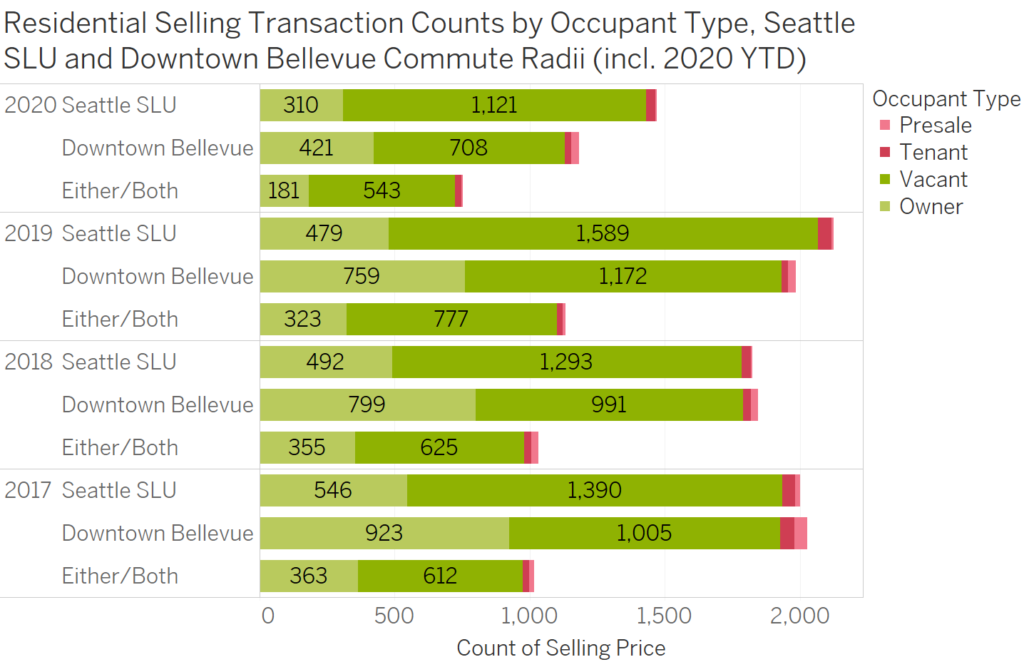 Most waterfront sales in the region are concentrated on the Eastside. The maps and comments below are added for convenience in case there is interest in this market niche.

Map 5: This map combines YTD2020 waterfront sales and selling activity within the commuting ranges of both the South Lake Union and Downtown Bellevue employment centers. Both condominium and residential listings are included on the first map. 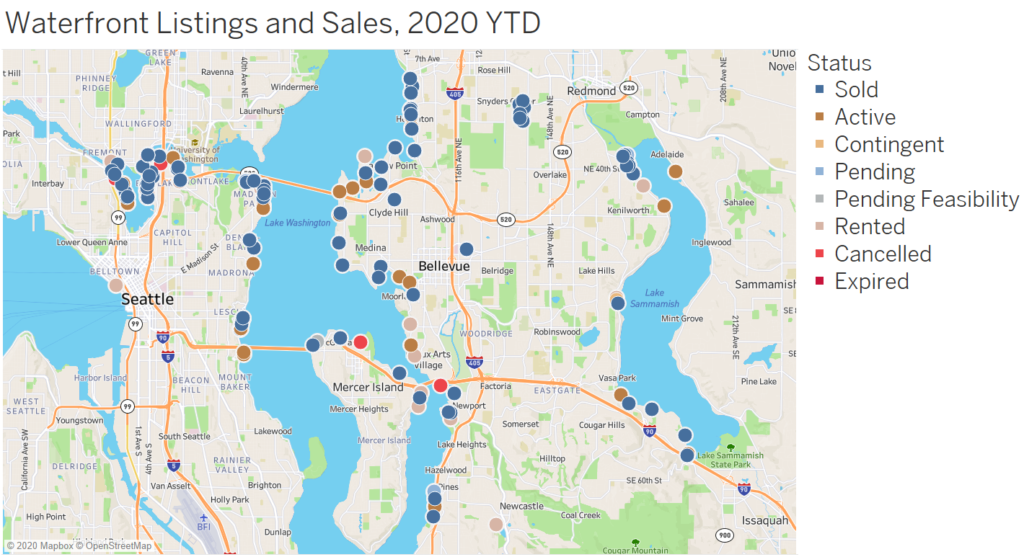 Map 6: The second map shows residential sales (only) in this region by selling price bracket; the brackets are necessarily higher than those used in the previous charts. Note the concentration of value between Yarrow Point and Meydenbauer Bay west of Bellevue. In YTD2020, there were ten NWMLS-listed waterfront sales in this area, selling at a median $8.4 million and an average $8.77 million. Four of these homes sold at their asking prices. The highest price paid was $15.0 million, which was reduced 9.1 percent from the listed price. 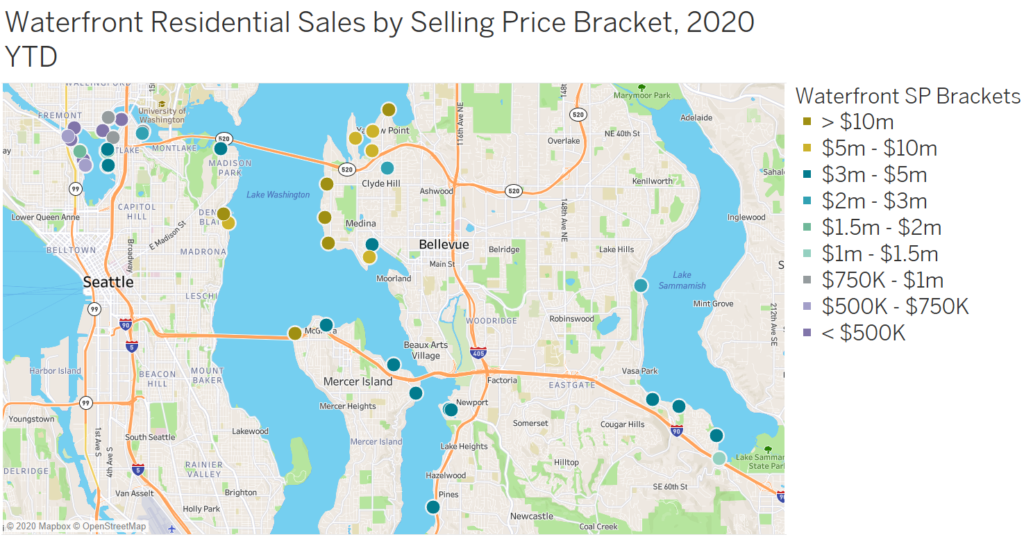