As seen in GeekWire

Savvy homebuyers encouraged by improved selection and historically low interest rates are making their way back to the market and developers and brokers are sprinting to catch up. Realogics Sotheby’s International Realty (RSIR) is sponsoring a new condominium showcase at the Fairmont Hotel on September 12th during the BISNOW Multifamily Annual Conference. The much-anticipated event is expected to draw hundreds of industry leaders and brokers seeking advance information on a bevy of new developments making their debut this Fall.  Dean Jones, RSIR President and CEO will moderate an expert panel of developers, economists and marketing professionals to discuss the Seattle pivot to homeownership after years of anemic supply and rising prices.

“This is the first time a collection of new condominiums is being showcased since we last presented to the 2007 Condo Expo more than a decade ago,” admits Jones. “The reality is we’ve witnessed an incredible apartment cycle following the recession and seen rents rise as much as 50% in Seattle since 2010. Now many of those renters are seeking homeownership to lock in their housing costs and participate in equity gains in what’s become the fastest-growing large city in the US.”

Jones refers to a recent report jointly researched by RSIR and O’Connor Consulting Group, a leading real estate economist and appraisal firm that specializes in multifamily housing throughout the metro area. Among the observations, apartment vacancies rose distinctly during Q4-2017 as demand fell by 4,500 units throughout King and Snohomish Counties; while during the same period sales of condominiums and single-family properties swelled by 5,500 units over Q4-2016.

“This is a direct indication of increasing demand for homeownership,” said Brian O’Connor, Principal of O’Connor Consulting Group and one of the panelists during the BISNOW conference.  O’Connor notes a record number 27,000 multifamily housing units will be delivered in the downtown Seattle submarket during the current decade but 93% of that was purpose-built for rent and not for sale. As a result, there are currently only two new mid-rise and high-rise developments offered on the market at recently delivered Gridiron Condominiums and NEXUS Condominiums, which will be completed by late 2019. Collectively, they offer 496 new units but 85% of them have already been presold. In fact, both developers recently removed their listings and suspended their marketing activities in favor of reintroducing remaining inventory into a future market. More inventory is coming, including the 265-unit Emerald Condominiums and the 352-unit SPIRE Condominiums in downtown Seattle. Both are already under construction with occupancy by late 2020, however neither have officially offered units for sale yet. And at KODA Condominiums, a 203-unit building will soon break ground in the International District for occupancy in late 2020, however nearly 85 percent of the units have been reserved for priority presales, many with second positions.

“Developers are positioning for the Fall sales season and it’s going to be very active,” adds Jones. “With mid-term elections approaching and strong market fundamentals, we expect interest rates to remain stable but inventory and median home prices to rise – it all adds up to more options and opportunity for homebuyers.”

Given the lack of new supply, several developers that preserved the optionality of renting or selling have decided to offer condominiums. At least three newly built communities and one impending groundbreaking will enter the market in the coming weeks offering reservations on units in advance of their public sales debut. Three are part of The Neighborhood Collection; the 51-unit Edison on Capitol Hill; the 34-unit Atrium on Capitol Hill; and the 48-unit Wallingford45 in Wallingford. Each are targeting attainable price points and 2018 occupancy from the low $400,000s to more than $800,000 with the majority hitting the conforming loan limits, allowing buyers to qualify with as low as 3.5% down payment and lower FICO scores and the sharpest interest rates. The logic behind The Neighborhood Collection was clearly arrayed last week in a front cover article by The Puget Sound Business Journal entitled, “The Condo Craze” as follows:

“We always planned for this as an option,” said Seattle real estate veteran Elliott Severson, principal of the Wallingford Development and part of The Neighborhood Collection group. “There just is not product in this price range, especially in the neighborhoods.”

He’s right (especially if a buyer wants a newer home). According to the NWMLS, there are only 31 homes listed for sale in downtown Seattle and Central Seattle that were built in the last decade but only one of them is on Capitol Hill and preferred options in Wallingford are even tighter. The reason is lack of supply while prices have been rising, at lease one percent per month in recent years and developers have been building apartments instead of condominiums. The following chart indicates the challenge buyers face – the number of homes available and sold year-to-date as of August 30, 2018 dropped by 42 percent below $500,000 as priced notched up above $500,000. Similarly, prices between $500,000 and $750,000 dropped by 4 percent while prices $750,000 and above were rising by an average of 28 percent.

The search for affordability has led many buyers to look outside the urban neighborhoods but rising commute times have become a compounding issue in the region. One solution is transit oriented developments, or TODs where developers are encouraged by higher density zoning near transit stations. One example is BDR Urban’s new Encore at Sonata Place – a 96-unit condominium development planned immediately across the street from the Columbia Center Station for the LINK Light Rail system. Soon homeowners can enjoy the option of driving in or riding the train into downtown Seattle in just 15 minutes. Here, a collection of efficiently-designed studio, one bedroom, one bedroom plus den and two-bedroom condominiums range in size from 383 sq. ft. to 1,020 sq. ft. and will soon offer reservations at price ranges from the low $300,000s to more than $800,000.

Jones points out that condominiums aren’t all created equal and construction quality, not to mention design and finishes, can vary greatly. He says newer buildings have the opportunity to distinguish themselves through taller ceilings, improved specifications and new technologies in green development, along with new home warranty programs.

Both The Neighborhood Collection and SOLIS will begin accepting reservations on September 15th at 11am in their respective preview centers on Capitol Hill. Reservations require a fully-refundable deposit of $5,000 held in escrow and will lock up a set price range on a specific unit allowing the buyer to review the opportunity without fear of multiple offers or missing out.

“It’s effectively a presale of a presale and offers convenience to the buyer and the seller during these frenetic times,” said Carlene Pride of The Pride Group, a broker with RSIR and listing agent representing The Neighborhood Collection. “

Reservations have proven popular with consumers drawing lines and even overnight campers as prospective buyers vie for preferred selection and introductory prices. RSIR has successfully deployed the program twice in as many years and suggests that about 75 percent of reservation holders move forward with their purchase. 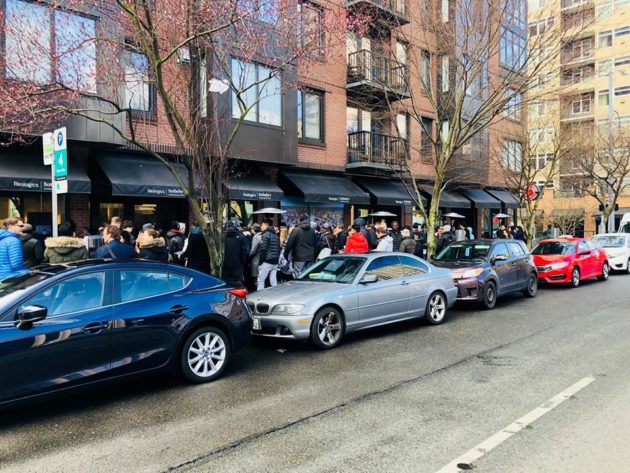 Many of the reservations and recent sales have been to recently relocated workers, especially in the tech industry, that were renting for several years and decided to buy.

“It makes sense that a new recruit would tread water in an apartment while they evaluate their new job and their new city,” said Dave Janssens, a RSIR broker representing SOLIS Condominiums. “Many are coupling up, vesting in their companies and watching both rents, median home prices and interest rates rise – at some point they talk to their CPA and decide it’s time to buy.”

Janssens and O’Conner agree that presales are in eager demand when there is strong home price appreciation. The benefits aren’t just equity gains, however, as presale buyers also enjoy the opportunity to personalize their new residence and plan ahead with enough time to sell an existing home before moving in to the one under construction.

From an economic perspective, the Seattle metro area is firing on all cylinders – especially in downtown Seattle and its surrounding neighborhoods. A recent report by Downtown Seattle Association revealed there are $5.6 billion in projects under way, a 27 percent increase over the prior year. In fact, there are 224 projects in various stages of development combined, nearly the same number completed in the last eight years noted The Puget Sound Business Journal. Downtown Seattle saw more office space completed last year than any other city in the US, representing 20 percent of the CBD office construction in the nation. The majority of the construction targets the rising demand for tech campuses as the Silicon Forest competes with the Silicon Valley for recruiting and retention of tech workers.

“It certainly helps that Washington State has no income tax and our housing prices, for now, are more attractive than the Bay Area with what seems like a longer runway for growth,” concludes Jones. “As long as the jobs keep coming the housing demand will stay high with a noted pivot to own vs. rent. I don’t see that demand changing anytime soon, even in the shadow of Amazon’s HQ2 decision, which should be revealed soon. Once employees know where they’ll land, they’ll likely firm up purchasing decisions as well.”