As Housing Trends Normalize, Tech Titans Continue to Drive Demand into Seattle and Beyond

Sensational media headlines implying a housing downturn are contradicted by sustained job growth in the Seattle metro area. The Tech-30 Report, released by large commercial brokerage firm CBRE, ranks Seattle the top U.S. market in 2018 with high-tech jobs increasing 26 percent over the last two years. Another peer firm, Colliers International Research, is tracking nearly 6.5 million square feet of Class A office space demand in Seattle and notes a majority of the tenants (66.2 percent) are tech users. That represents about 30,000 “information-worker/STEM/FIRE” jobs ahead with another 120,000 workers supporting those jobs. Job growth and the sustained economic activity it brings will increase demand for housing in the Seattle metro area. 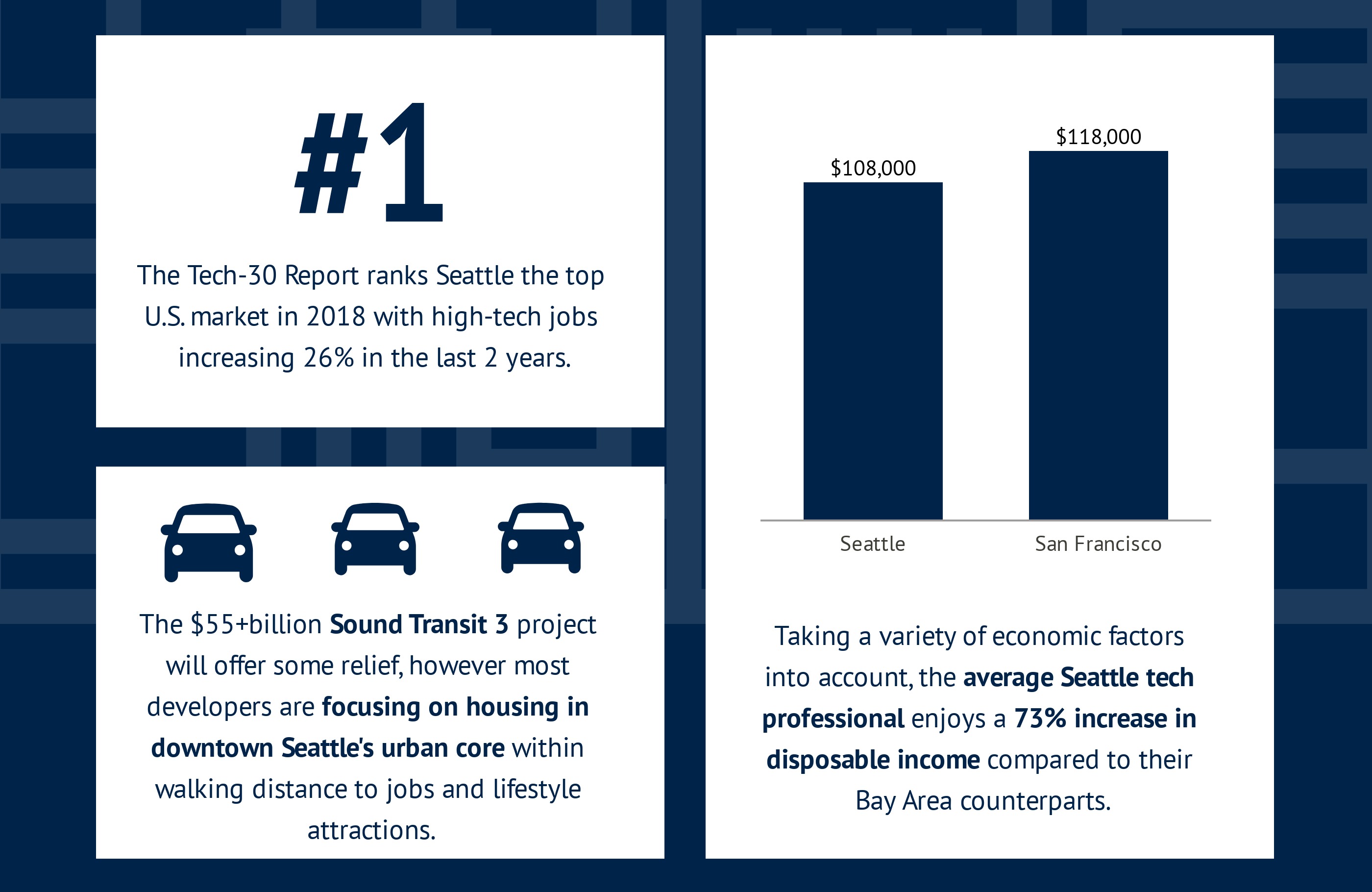 Housing inventories across King County have risen steadily since May, as pending sales underwent a seasonal summer slowdown—until reversing course more recently. After years of buyer frustration and fatigue, consumers are now encouraged by improved selection, seller willingness to negotiate, attractive mortgage rates and the benefit of capturing tax deductions in 2018. As buyers spring back, the number of homes for sale is trending downward, which is typical during the fourth quarter.

Increased buyer activity is most pronounced near urban job centers where thriving tech companies continue to generate housing demand, especially at affordable prices below conforming loan limits. Pending sales in downtown Seattle increased 43 percent in September over August, according to a review of Northwest Multiple Listing Service data, resulting in a 16 percent spike in closed sales in October over the previous month. Despite increased supply of existing homes for sale and new construction offerings, 2018 will close out as a neutral market—not as a buyer’s market. In fact, new high-rise condominiums are posting strong reservations and presales as more buyers plan ahead for their futures, (typically two years before occupancy). The opportunity to remain at a current address while awaiting the delivery of a future home may also explain some slowing in the pending sales of existing homes on a year-over-year basis.

“We focus on the economic trendlines and not the headlines,” said Dean Jones, President and CEO of Realogics Sotheby’s International Realty (RSIR). “This normalization trend in housing means buyers and sellers are finding greater balance. It’s actually a healthy turn that I think, will result in a stable market ahead—and stability benefits both buyers and sellers.”

Jones warns housing statistics measured month-over-month or quarter-over-quarter provide the press with material for provocative editorial, but does not define the market. The regional economic fundamentals, led by a preference for tech employers and the resulting job growth and increasing population, precipitates the trendlines for housing ahead.

The Seattle metro area has become a darling for new and established tech companies attracted to its relative affordability as compared to Silicon Valley and other national tech centers. This aids in the recruiting and retention of top talent and creates sustained housing demand for rent and eventually for sale. An average salary for a software engineer in Seattle is $108,000 compared to $118,000 in San Francisco (a delta of $10,000 per year that’s quickly offset by California’s State income tax of as much as 13.3% at the margin and the very high cost of housing—to rent or own—which is nearly twice as expensive as Seattle). For example, according to JLL Research, the typical one-bedroom annual apartment rent in San Francisco is $45,288 compared to $27,864 for a similar lifestyle in Seattle. Taking a few differences into account, Seattle tech professionals enjoy a 73 percent increase in disposable income compared with their colleagues in the Bay Area. This windfall helps build up savings for a down payment on a future home purchase. Stock options also help.

Bay Area tech titans like Facebook, Google, Apple, UBER, Oracle, Adobe, Dropbox and Twitter are just a few companies headquartered in California, yet collectively populate more than 2.5 million square feet of Seattle-area office space. Google and Facebook alone will occupy another 1.5 million square feet by 2020, which will bring another 10,000 high-paying tech jobs to Seattle in the short term. This is on top of the meteoric growth at Amazon, which already controls more than 11 million square feet of office space in downtown Seattle. Much has been speculated about Amazon’s second headquarters (“HQ2”) and its effect on Seattle. Since the announcing just over a year ago that they would establish HQ2, however, the company has leased an additional 2.4 million square feet in Seattle with room for another 14,000 new employees.

“What’s good for Amazon will ultimately be good for Seattle—even if that means some jobs being created at another campus,” suggests Jones. “A rising stock value will also have a multiplier effect here—it’s just like the ‘Microsoft effect’ we witnessed 20 years ago. Yet this time, it’s happening more quickly and in a very urban context with a more localized impact on housing because of transportation challenges and lifestyle preferences. Consumers value their time and they strongly dislike the long commutes required to find affordable housing alternatives. City living, with immediate access to both cosmopolitan and recreational opportunities, is the attractive solution.”

Sound Transit 3, a $55+ billion transportation package will certainly offer relief, but it will be another decade before the region feels its full benefit, according to Jones. He notes several developer clients are targeting residential projects near existing (or planned) transit centers for this very reason. Far more developers, however, have plans to build housing in downtown Seattle’s urban core within walking distance to the jobs and lifestyle attractions.

“Urbanization is here to stay,” adds Jones. “More than 27,000 multifamily housing units will be delivered in downtown Seattle this decade, but 93 percent of these are for rent—not for sale. That’s a substantial consumer pool paying high rents with zero tax benefits or any ability to build wealth through home ownership. Many people will migrate towards home ownership while preferring to stay downtown, so demand for in-city condominiums will continue to dramatically rise and so will median home prices.”

Supply will also increase, but building to affordable prices remains a challenge. Construction costs are increasing quickly due to a record number of new developments and tariff wars. Consulting firm Turner & Townsend said Seattle and San Francisco will see construction costs rise by another 5 percent in 2018, according to the International Construction Market Survey. The Downtown Seattle Association reports that the city is currently experiencing $5.6 billion in projects, topping last year’s record of $5 billion, with 224 projects in the pipeline (nearly as many as were completed in the previous eight years). In 2017, downtown Seattle represented 20 percent of all the CBD office construction in the nation and hotel development boomed in anticipation of the $1.7 billion expansion of the Washington State Convention Center. This doesn’t include billions of dollars in capital projects like the new Highway 99 tunnel, the waterfront revitalization, expansion of the Seattle Streetcar and LINK light rail system or other infrastructure updates required by the fastest-growing large city in the U.S.

Commercial developers are clearly optimistic. Nearly 2 million square feet of speculative office space is currently under construction in downtown Seattle with occupancy by 2020. That space will eventually attract additional companies and an estimated 13,000 new jobs will be created in the relative near term.

Above: A Google map of the Seattle metro area illustrates the location of existing and planned high-tech campuses and other large employers in the region along with primary transportation routes and subject communities.

The following observations aggregate continued tech and economic expansion in the region:

Tech by the Numbers – Seattle

Tech by the Numbers – Eastside 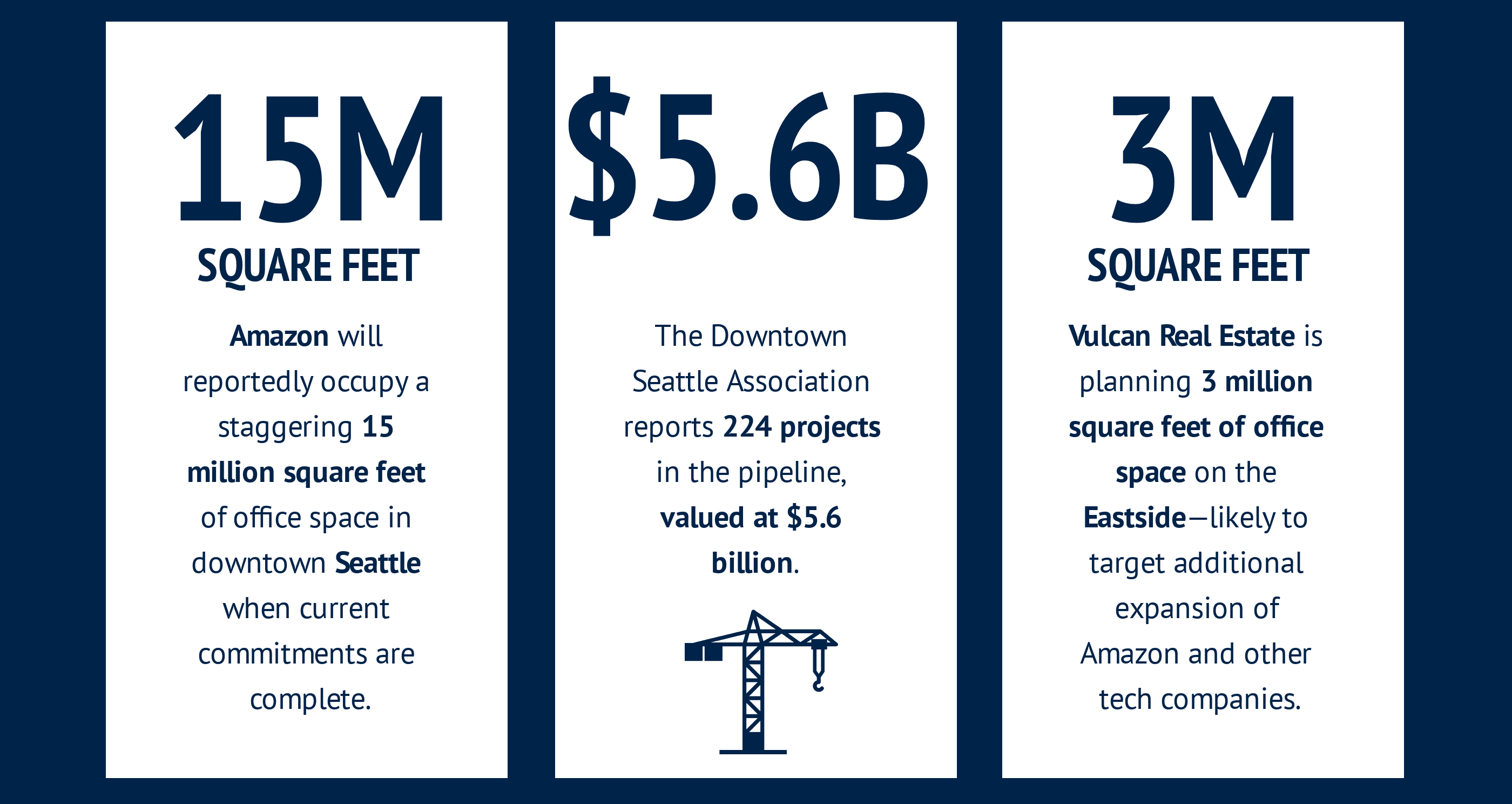 Seattle’s relative affordability, high quality lifestyle, lack of a state income tax, and investment in transportation infrastructure will give the Seattle metro area a strong competitive advantage over other West Coast tech centers. Forbes just announced that Seattle, for the first time, was number one on the list of “Best Places for Business and Careers.” Sustained job growth will continue to draw new people with a growing desire for homeownership as the Seattle metro area plays catch up to its West Coast peer group. The region is also a top destination for international interests, most notedly from Asia, given a bounty of top-ranked schools, prospects for investment (including robust H1-B and EB-5 immigration programs) and rapidly expanding international airline routes through SeaTac International Airport (the fastest-growing airport in the U.S.).

“Seattle is still catching up to the traditional West Coast growth engines and global wealth destinations of pricier markets like Los Angeles, San Francisco and Vancouver, B.C.,” concludes Jones. “In many ways, our market trajectory is a familiar reflection of what’s already taken place in other global gateways on the rise.”

Information was obtained from sources deemed reliable but cannot be guaranteed. Reader is encouraged to perform independent due-diligence before relying on information contained herein.