In a study that ranked 62 of the largest cities in the United States for factors ranging from schools and life expectancy to jobs and culture, WalletHub proclaims that Seattle is officially the nation’s best big city to live in. As the report outlines, urban settings represent under 3 percent of landmass in the country but are home to about 80 percent of the population and for many, city life is where residents flock to opportunities, whether those come in the form of economics and jobs, culture and entertainment, dining or beyond.

According to WalletHub, “each major U.S. city has a unique set of issues, to go along with its own character and charm.” The key, however, is that some are overcoming their obstacles with greater ease, which results in a fabulous place to lay down roots.

Seattle stood out in particular for income growth—thanks in large part to the thriving technology industry—where it tied with San Francisco, CA and Austin, TX (two other tech hubs that landed third and fourth on the list) for the first position. 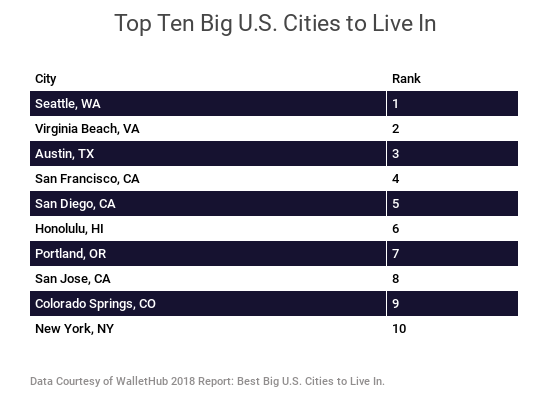 Other strong Seattle areas included quality schools and walkability, which will only increase with the expansion of the LINK Light Rail and the Emerald City’s “One Center City” initiative, a two-decade plan to improve public and pedestrian spaces and reduce congestion. Among the less than favorable factors? Affordability, crime, and public parks, which revealed average rankings. It also seems those in top-ranking cities are eager to fuel their caffeine habits, as coffee shops per capita boasted a staggering six-way tie between New York, Los Angeles, Chicago, San Diego, San Francisco and Seattle, of course.

For more information on the top-ranking U.S. cities, read the full WalletHub report >>