An In-City Inflection Point as Buyers Return to Urban Living

As the Seattle metro area continues to witness skyrocketing home prices, affordability has become an increasingly elusive goal, as is timing the market for developer incentives and today’s historically low, but rising, interest rates. As reported by The Seattle Times, condominium sales in Seattle saw a 121.2 percent increase year-over-year, while median prices jumped 4.5 percent, compared to April 2020.

“It’s a perfect storm for savvy homebuyers that know how to spot the opportunity,” said Dean Jones, President and CEO of Realogics Sotheby’s International Realty (RSIR). “The fundamentals are creating FOMO (fear of missing out) as the preferred inventory at the sharpest prices are the first to go—once these units are absorbed, so will be the incentives, and a new growth cycle is upon us.” 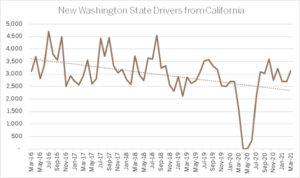 Jones points to a noted spike in sales as the residents that may have fled high-density markets during the COVID pandemic are returning to live and work in city centers and as renters cash in on flush tech stock portfolios before the prospect of future capital gains taxes set to trigger by January 1, 2022. At the same time, demand for office space in the region has led to a surprising recovery at a time when many wondered if the work-from-home trend was going to render urban campuses a relic of the past. But not so fast. More than 100,000 tech workers are being encouraged back to work at Amazon, Apple, Microsoft, Facebook, Expedia, and other urban employers this year. And that’s already having a noted effect on the housing demand of in-city apartments and condominiums. Even the long-term trend of Californians has returned as the top inbound buyer demographic, lured by the Evergreen State’s more favorable tax structure and economic opportunities.

“Basically, all the trendlines that were pessimistic a year ago, have reversed course and that’s shoring up consumer confidence,” said Jones. “While it may take more than a year to see the urban ecosystem looking like they were before the pandemic and following other political headwinds, I do believe we’ll look back at this moment as being the time to lock into this market trajectory. Waiting will more likely mean less supply, more buyer competition, and both prices and interest rates on the rise.”

What a difference a year makes.

From The Seattle Times: Rents rise again in Seattle after pandemic plunge →

According to the Northwest Multiple Listing Service (NWMLS), downtown Seattle resale condominiums (Area #701) witnessed nearly twice the pending sales activity year-over-year so far in 2021 while inventory plummeted. Jones is reminded of the market conditions from a decade ago when the market was recovering from the Great Recession and provided some of the best opportunities for homebuyers. Like then, market pundits feel it could be several years before we see new towers break ground.

“I believe what we see is what we get for inventory for now,” added Jones. “The challenge with high-rise construction is the demand can rise much quicker than supply—it can take three to four years to go from concept to closings with these buildings and we’ve seen how quickly the market can change.”

Developers face rising construction costs and tighter lending for larger projects, especially as current market values don’t pencil a new groundbreaking. According to RSIR research that tracks current and pending condominiums in Seattle, there are 15 condominium buildings either recently built or under construction in the city limits with occupancy between 2018 – 2023 and totaling 2,256 units, of which approximately half of this new supply is either already sold and closed, or under contract. The finite supply is also giving rise to the prospect of future condominium conversions, which are buildings that were once operated as apartments for rent that become available for individual ownership, such as the newly announced Goodwin in Belltown. Other opportunities include the option for reservations, essentially a first right of opportunity, to purchase a presale property such as The Graystone on First Hill, which will deliver in late 2022 providing prospective homeowners plenty of time to plan ahead, including the sale of an existing home.

The rising demand is not limited to Seattle either as boom-burbs are also seeing impressive sales momentum. For instance, Jade Residences in Kirkland has already found buyers for 72 of the 136 units, many of which sold during the pandemic and is timed perfectly for the full reopening of the economy amid the Village at Totem Lake lifestyle center. Occupancy is slated for fall 2021.

Another market trend that is being noted is would-be sellers of resale condominiums in downtown Seattle are now more encouraged to make a move, either to upgrade in the current market or to trade lifestyles altogether.  “The added buyer demand downtown is creating liquidity for sellers to plan forward in other buildings where they can lock in a presale and time their move later this year,” said Ami Bumia, RSIR’s Executive Director of Sales for New Developments. “After spending the last year working from home in their in-city condominium, some are ready for a change of scenery.”

Living on the beach is one attractive opportunity. Bumia confirmed prospective buyers that currently live in a downtown Seattle high-rise are exploring Infinity Shore Club Residences on Alki Beach—the 37-unit waterfront building has been referred to as a “horizontal high-rise” given its concrete and steel construction, robust amenities and penthouse-level quality throughout.

“After the pandemic, there’s certainly a buyer group that would prefer to live in a low-density, more boutique scale community,” added Bumia. “There’s also a lot of excitement for West Seattle now that there’s a fix to the bridge in the works and commutes will be quick to downtown job centers, either by car, bike, or even the West Seattle foot ferry that’s in service.”